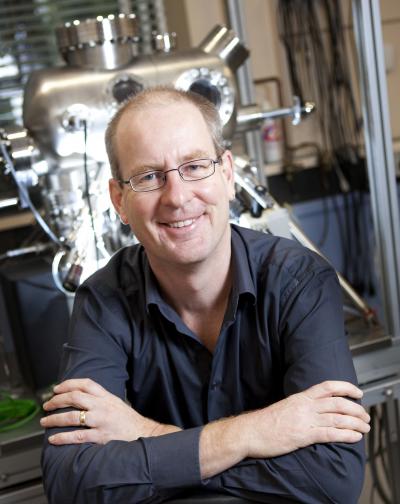 Feb 12, 2018  -  University of Canterbury (UC) Physics Professor Simon Brown is developing a neuromorphic computer chip that may solve one of the biggest problems in the computer industry – power consumption – and create a New Zealand semiconductor industry.

A neuromorphic computer chip is basically computer hardware that works like the brain, Professor Brown, of the University of Canterbury’s School of Physical and Chemical Sciences, says.

“Neuromorphic devices mimic the behaviour of the networks of neurons in the brain, using nanoscale switches that emulate synapses. These devices learn from their inputs, providing functionality that is difficult to implement even in software implementations of neural networks,” he says.

“Computers built from neuromorphic devices are expected to be far superior to standard computers in some tasks, such as image recognition. Having discovered neuromorphic behaviour in simple devices composed of randomly deposited nanoparticles, we aim to demonstrate the commercial potential of this technology by building and optimising a next generation of more sophisticated devices.”

Compared with conventional computers running neuromorphic software, these neuromorphic chips promise huge advances in size, speed and power consumption. Currently about 8% of the world’s electricity is used to power computers.

“This has the potential for a huge impact on the world, by providing a low-cost computer chip that uses self-assembled nanocomponents to build brain-like structures that naturally support new approaches for solving highly complex tasks, including pattern and image recognition.”

Professor Brown’s Neuromorphic Computer Chip research has secured both research funding (from MBIE in 2016) and commercialisation funding (from KiwiNet in 2017). The project has been supported by ongoing funding from the MacDiarmid Institute for Advanced Materials and Nanotechnology.

UC Business Development Manager David Humm, who specialises in the ICT sector, describes this as “unique and leading-edge research” being undertaken in New Zealand.

“The core technology has extensive patent protection due to its uniqueness. This could be the start of a New Zealand semiconductor industry,” Mr Humm says.

“This emerging technology field is diverse, with a number of commercial organisations – such as IBM, Qualcomm, HP and various international semiconductor companies – taking different approaches to the development of neuromorphic technologies.”

Professor Brown adds, “Those companies are doing impressive things, but their technologies are based on the same processes that are used to make conventional silicon chips, and so they have the same limitations. Our chips are made in a completely different way which bypasses those problems.”

Demand for new technology innovations that rely on semiconductor chips has become ever greater – simple scaling and cost reductions based on Moore’s Law will soon no longer be enough to improve device performance. New growth areas such as brain-inspired computing, the Internet of Things, energy-efficient sensing, automated devices, robotics, and artificial intelligence are calling for new breakthroughs.

Neuromorphic computing mimics the way neurons are connected and communicate in the human brain, and enthusiasts say neuromorphic chips can run on much less power than traditional processors.

Neuromorphic computing creates new opportunities for distributed, embedded processing to enable smarter products, infrastructure, environments and services. It is a fundamental departure from conventional computing technologies and the constraints imposed on system development such as large batteries. Neuromorphic computing available in commercial applications is in its early growth stage but has the potential to reshape the technological landscape of the computing industry in the coming years.

More in this category: « NZ ready to repel the robot invasion Kiwi kids to give world tech experts coding lessons »
back to top