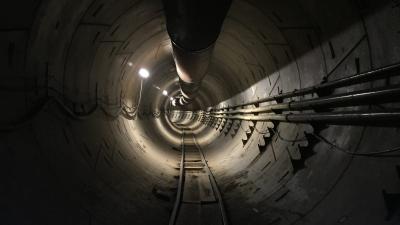 The permit, issued in November 2017, allows preliminary tests and digging on the site at 53 New York Avenue NE in Washington DC – close to the Bureau of Alcohol, Tobacco, Firearms and Explosives and next to a McDonald's restaurant.

The currently empty plot could eventually become a station for the super-high-speed transit line, which is planned to connect DC, Baltimore, Philadelphia and New York City.

Officials in Maryland have already approved a tunnel along a state-owned portion of highway, which could become part of a DC-Baltimore link and form the project's first leg.

Pods of passengers and platforms loaded with vehicles would "skate" through the tunnel at high speeds to dramatically reduce the journey times between the cities, and reduce congestion on the roads above.

Musk already has plans for The Boring Company to create a network of similar tunnels in Los Angeles, which is renowned for its traffic problems. He caused a backlash earlier this year after calling the city's public transport "a pain in the ass".

Hyperloop was first conceived by Musk in 2013, but the billionaire is no longer directly involved with any companies developing the technology.

One of the largest, Hyperloop One, successfully tested full-scale pods at speeds up to 190 miles per hour last year, and was renamed Virgin Hyperloop One in October 2017 following a major investment from Richard Branson's company.

Hyperloop lines have so far been proposed to link Dubai and Abu Dhabi; central European capitals Bratislava, Vienna and Budapest; and several urban areas between Mexico City and Guadalajara.

Musk is also the founder of electric car company Tesla and CEO of SpaceX, which recently launched the "world's most powerful" rocket with one of his vehicles on board.