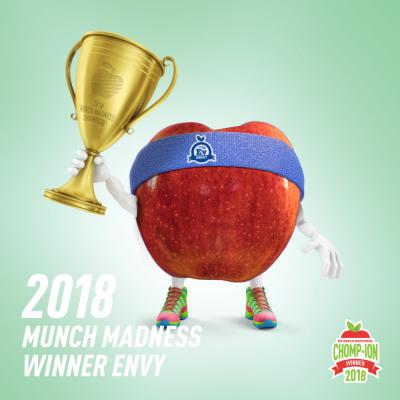 American’s have once again selected New Zealand-born Envy™ apple as their favourite in a consumer competition run by the US Apple Association.

The interactive tournament-style competition called on American apple fans to vote for their favourite from 16 different apple varieties during the month of March.

Kiwi grower, T&G Global, was well represented in the competition with three of its premium apples namely JAZZ™, Envy™ and Pacific Rose™ being voted on by apple-lovers.

But after intense voting, it was Envy™ that stormed into the final, and once again, took out the top spot.

“We’re thrilled Envy™ has once again been chosen by US consumers as their favourite apple given American’s love of all things apples including apple pie,” says T&G Global’s executive general manager, pipfruit, Darren Drury. “We’re equally delighted JAZZ™ made it to the semi-finals and that our Pacific Rose™ also made it through the earlier competition rounds.”

Tracy Grondine, director of consumer health and media relations at US Apple says the competition is now in its third year with Envy™ winning the last two.

“For the third year, Munch Madness provided consumers a fresh and creative opportunity to learn more about apples, all while connecting the roster of our top 16 US varieties by sales. Congrats to Envy™ for its second consecutive win!”

T&G Global, who now owns the trademark for Envy™, first planted it in New Zealand a decade ago. Soon after, T&G planted Envy™ in the USA and the company now expects to harvest more than two million cartons in the USA by 2020 alone.

“We’re particularly proud of how well Envy™ is doing in the US and in other key overseas markets such as Thailand, China and Vietnam,” adds Darren.

“We’re continuing to increase global production of this beautifully sweet and crunchy premium apple to keep up with the growing demand. New-season Envy™ apples from New Zealand will soon be appearing in US stores so more people will be able to enjoy the apple that remains the Envy™ of others in America but also around the world.”

And Kiwis can also look forward to tasting new season Envy™ when it arrives in supermarkets fresh from Nelson and Hawkes Bay orchards later this month.

More in this category: « Market investment pays off in Korea for AVANZA Harlequin ladybirds a threat to New Zealand horticulture »
back to top