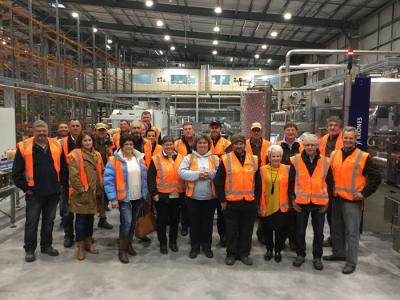 Fonterra Farmers see first-hand the operations at the new plant.

The agreement between Fonterra Brands New Zealand and Apollo Foods, an innovative start-up company, will help both companies capitalise on the increasing global popularity for lifestyle beverages.Apollo’s new operation includes innovative beverage filling technology which allows a range of different containers to be produced on site and filled with a range of different products on the one production line.The technology at the plant provides market leading quality control and allows for a superior fresh taste experience over an extended shelf life. This provides opportunities for outlets to stock a greater range of products and in turn gives consumers more choice.Managing Director of Fonterra Brands New Zealand Leon Clement, said a global surge in demand for dairy and fruit beverages presents a fantastic opportunity for both companies.“As high-quality drinks play an increasingly large role in consumers’ diets around the world, New Zealand companies have a real opportunity to create value-adding initiatives across our primary industry sectors,” said Mr Clement.“By taking an innovative partnership approach to production with Apollo Foods, we have been able to open up new opportunities for future brands – and create even more value for our farmers.”The Apollo Foods state of the art facility will have the capacity to produce millions of litres of beverages each year. It will allow Fonterra Brands New Zealand and Apollo Foods to take the lead in their respective categories and benefit from new technology to supply consumer drinks to the growing market.Ross Beaton, Managing Director at Apollo Foods said “I am absolutely thrilled and privileged to work with Fonterra Brands New Zealand to bring added value beverages to the global consumer – and better still that we are producing it all right here in Hawke’s Bay”.Hastings Mayor Sandra Hazlehurst welcomes the announcement, following a successful 18-month partnership between the Hastings District Council and Apollo Foods to bring this project to fruition.“It’s fantastic to see new leading-edge production facilities choosing Hawke’s Bay as their location. It cements our beautiful district as a leader in food production,” said Mrs Hazlehurst.Following the commissioning of the plant last month by Apollo production is underway of a new look, new formulation, “Mammoth” flavoured milk which contains 40 per cent less sugar and has a shelf life of six months. In the coming months both Fonterra Brands New Zealand and Apollo will independently release their own varieties of new beverages to the New Zealand market – something to look out for.