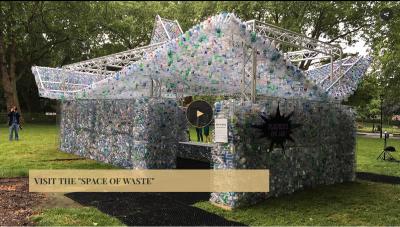 London currently uses over a billion single-use plastic water bottles every single year. To raise awareness, an art installation showing the drastic damage humans are doing to the environment by discarding plastic bottles was unveiled at London Zoo.

The work of art is part of the #OneLess campaign by the UK's Zoological Society of London (ZSL).

- Since 1950, there has been about 8.3 billion metric tons of plastic produced worldwide, of which only 9 percent has been recycled, according to statista.com. 79 percent of the plastics can be found in landfills or in the natural environment.Reuters

- Today less than 30% of plastic waste generated in the EU is recycled.

- Experts say that every year, 8 million tonnes of plastic end up in our oceans. According to Greenpeace it is "the equivalent of a truckload worth of plastic entering our oceans every single minute".

- By 2050, nearly all seabirds will have plastic in their stomachs. Already, 9 out of 10 of the birds have some of the substance in their digestive tracts, according to a study published in the journal Proceedings of the National Academy of Sciences.