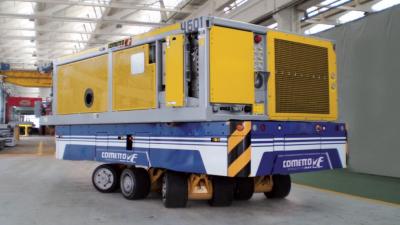 Comet platform can rotate in place.

When is a forklift not a forklift? When it’s an electro/hydraulic wireless-controlled standalone, multi-directional, 28-tonne Cometto payload platform — that’s when.

The standalone platform opens up many opportunities for productivity and safety gains in fabrication sheds, transport depots and dockside manufacturing.

It’s able to carry 28 tonnes on its own flat deck, lift it nearly half a metre from a low point of 635mm, turn it, crab sideways, rotate 360 degrees and, if required, dock in a predetermined position.

An operator can place a robotic welder on his platform and take the machine to the job, instead of using an overhead crane to get the job to the welding point.

Laser anti-collision systems and optional laser guidance for a pre-selected journey and docking station presets can broaden the application usage.

But for the trucking industry it’s a huge advantage to be able to substitute for a heavy-duty crane that’s bound to a set track, or an HD forklift that requires large areas of turning space.

The 12-wheeled platform pictured combines cushion tyres and a 420mm suspension travel with a balanced load distribution system, all controlled via a cable-less or plug-in remote control unit.Each double wheel module can be independently controlled, but the system presets correct steering angles for any direction of travel.

Each wheel set has two AC traction motors mounted on a planetary gearbox. They are emission free and noiseless, incorporate reverse-current brakes and are powered by a 48-volt lithium battery pack.

The battery pack has enough charge for up to 7km of travel and is mounted on a roller support module. The life cycle is rated at 2000 charges with 80 per cent depth of discharge.

The platforms can be linked side-by-side or end-on to cater for loads in multiples of 28 tonne. An extreme version that is explosion proof, with all the electrics contained in shells, is available for offshore, chemical or gas plant use where sparks are not welcome.

The controller software is linked via a master slave when the platforms are combined, and the system is also able to operate multiple platforms that are not physically attached, but carry a single common load.

MRSK director Mike Dunbar says the early interest in the unit has been very strong, particularly as it is arriving into a strengthening construction and mining environment.

Electronic control of the hydraulic suspension and the large diameter cushion tyres with 420mm suspension travel, allow the unit to traverse the widest range of surfaces and enable horizontal stability on ramps or cross slopes.

An optional optical automatic guidance system is based on infra-red cameras and an interpreter able to follow environmental references.

The system will self control and self correct on its way to a predetermined point, such as a docking station.

More in this category: « UK-based tech refurbisher lays groundwork for NZ channel arrival Tough tub gets the job done »
back to top
Jul 25, 2018