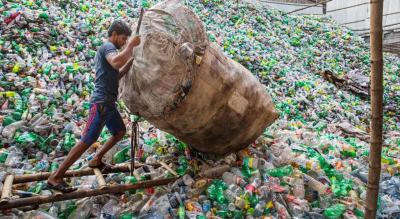 This story is part of Planet or Plastic?—our multiyear effort to raise awareness about the global plastic waste crisis. Learn what you can do to reduce your own single-use plastics, and take your pledge.

It’s hard to get your head around the story of plastic. The facts and figures are so staggering as to seem almost fantastical.

Can it really be true that half the plastic ever made was produced in the past 15 years? That a trillion plastic bags are used worldwide each year, with an average “working life” of just 15 minutes? That some nine million tons of plastic waste go into the oceans every year? And that estimates for how long plastic endures range from 450 years to forever?

The answer, unfortunately, is yes— those grim facts, and more, are all true. That’s why we asked writer Laura Parker and photographer Randy Olson to put this global crisis in perspective, in coverage published across our digital platforms and in our June print edition.

The good news is, this crisis can be mitigated. And all of us in this organization—from the National Geographic Society to the broadcast and publishing divisions of National Geographic Partners—want to do our part. With this issue, we’re kicking off a multiyear campaign aimed at educating consumers on the crisis and how they can help reverse the blight of single-use plastic in Earth’s oceans and waterways.

And that’s why, if you’re a subscriber in the U.S., U.K., or India, this month’s issue arrived in a paper rather than plastic wrapper. This change alone will save more than 2.5 million single-use plastic bags every month. We’ve also challenged all our international partners—who publish 36 local-language editions of National Geographic around the globe—to get rid of plastic wrappers by the end of 2019.

That’s just a first step. Because we’re committed to having an impact on this crisis, we’re launching a global campaign. Under the campaign banner of Planet or Plastic? we’ll deploy content across all our platforms to raise awareness and encourage consumers to act.

To build support for the Planet or Plastic? campaign, National Geographic is asking people around the world to pledge to reduce their reliance on single-use plastic. Those who take the pledge will become part of a new global community working to stem the tide of plastics polluting the ocean.

With the launch of the campaign and our June issue, National Geographic has also joined entertainment company Sky Media in supporting Sky Ocean Ventures, an initiative to invest in businesses that can help solve the ocean plastic crisis. National Geographic will contribute scientific expertise, grant and media muscle, and $10 million to help Sky Ocean Ventures identify and champion promising projects and technologies.

We’ll also join forces with like-minded corporations, nongovernmental organizations, and other institutions, in efforts to eliminate single-use plastic and promote recyclability, and we’ll support the National Geographic Society’s network of scientists, innovators, and explorers who are tackling this challenge worldwide. For example, the North Face already is busy reclaiming waste plastic. The outdoor product company is partnering with National Geographic to introduce a limited Bottle Source Collection, featuring shirts made from recycled plastic bottles diverted from National Park waste streams. Look for them in our online shop and at the North Face stores starting May 23.

And reusable water bottle company S’well—which was founded to reduce the use of plastic bottles—will produce a special line of its insulated, stainless steel bottles co-branded with National Geographic, available in our online shop in June.

"Some people deny climate change, but there are no ocean plastic deniers. The problem’s in plain sight."

And as always, we are proud to collaborate with our colleagues at the nonprofit Society. Starting with an initial expedition in 2019, scientists and explorers will study the type and flow of plastic in a river system to better document how plastic travels from source to sea. Their data gathering and observations will provide us all with fact-based, actionable information to guide our efforts.

With Planet or Plastic? we hope to do nothing less than transform consumer behavior—and we’re starting at home. We’ve hired an environmental consulting firm to conduct an internal audit at our headquarters in Washington, D.C., to assess how our own operations and supply chain use plastic.

After all, it’s the negligent use of plastic that’s gotten us in trouble, not the material itself. As Laura Parker writes in our June cover story, plastics have been a boon to humanity. They helped the Allies win World War II, “eased travel into space, and revolutionized medicine… In airbags, incubators, helmets, or simply by delivering clean drinking water to poor people in those now demonized disposable bottles, plastics save lives daily.”

And yet, as Randy Olson’s jaw-dropping photos show, we have created a plastic apocalypse. Developed nations off-load waste from our convenient lifestyle and foist the cleanup on some of the planet’s most vulnerable people. Our Planet or Plastic? campaign is a call to take responsibility for the messes we’ve already made, and act to prevent more.

Will eliminating a plastic magazine wrapper save the planet? Well, no. But it’s an example of the kind of relatively easy action that every company, every government, and every person can take. And when you put it together, that adds up to real change.

Lead Image: In Dhaka, Bangladesh, a man adds to a mountain of discarded plastic bottles. With this issue, National Geographic invites other institutions to join us in reducing plastic use. Watch this space for updates.

More in this category: « Technology will make NZ rivers cleaner UC researchers invent Storminator™ weapon in battle for survival of healthy waterways »
back to top
Oct 11, 2018