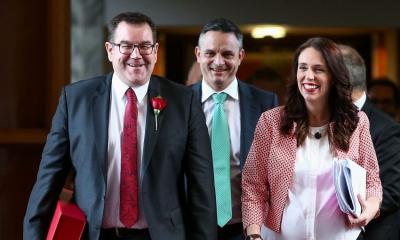 The budgetary heavy lifting was accomplished months before the actual budget which required a delicate balancing act, a pay-off in fact, prior to the budget proper.

The coalition pay-offs were entirely missed by commentators who were substantially bought-off themselves in the theatrical lock-up while they studied the nominal budget prior to its actual formal release.

The budget, a health, education, and welfare one was the tip of a much bigger iceberg that had been floated months before.

Once its two coalition partners were pacified the Labour mainstream was allowed to table its various HEW policies and do so without any hindrance.

Various other douceurs were also tossed into the pot and heavily publicised prior to the budget, notably the substantial green energy development fund and the Oceania aid scheme which was another personal scheme of New Zealand First strongman WInston Peters MP.

Neither is there any trim back of National’s show-boating industrial policies such as the Callaghan Fund – much to the chagrin of organisations such as the Taxpayers Union which describes these and other such organisational-target (rather than regional) schemes as corporate “welfare.”

The budget therefore actually took place in the lead up to the face value budget which conveyed to commentators an aura of shrewd if not restrained common sense.

Its skill was a conjuring one in that the real “prioritisation” took place while nobody was watching or, in the case of Taranaki’s de-industrialisation, terribly interested.

The commentators, who judging by the pre-announcement lock-up melee have taken on alarming proportions of scale, might in future be more aware of what this government is actually doing rather than in its pre-packaged set pieces designed to highlight what it says it is doing.

The government knows that its first priority, the one above all other “re-prioritisations” is to stay the government.

Which means keeping the coalition intact.

More in this category: « When a Labour Government Could and Did Fix House Shortage Labour Coalition Government Phrases Re-Purposed Since Helen Clark Era Threaten NZ Productive Sector »
back to top
Nov 11, 2018