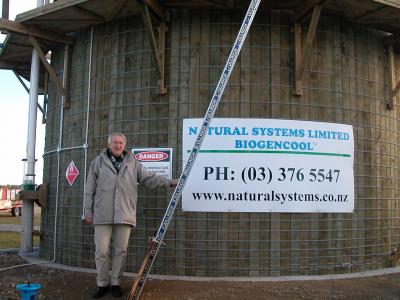 South Island electrical engineer Ian Bywater (pictured) is an internationally-recognised developer of biomass energy. Subsequent to his taking out patents on his BioGenCool™ dairy waste system he has consulted globally on the technique of using milking shed detritus to drive the shed including refrigeration and transforming the solids into organic fertiliser. In our 5 Questions For …series he explains why this closed-process anaerobic treatment, a standard internationally, and which leaves no residue is still ignored in New Zealand and at such immense disadvantage to the dairy sector here and its future......…

You claim that waste-powered milking shed approach in which the shed derives all its electricity from its own waste is the only solution to the dairy run-off waterway contamination problem?

It is provided the industry changes common practice. This will entail farms having free-roam indoor barns, and capturing all the effluent. Unless you consider the solution now being voiced by the Green Party which is to wean everyone off all animal-derived foodstuffs and closing down the dairy industry.

Why is it that so little is heard in New Zealand about this waste-digester technology in which milking sheds use all their own waste to create all their own electricity?

The fairly simple technology of anaerobic digestion of effluent kills off a very high percentage of pathogens. The liquid out flow from the digester tank can then be screened for solids. The liquid is recycled for wash-down of the milking yard or barns, while the solids are aerobically composted to make organic fertiliser, either sold or used on farm. As I have sought to explain to you, the approach consumes everything in a natural cycle. Nothing escapes into the rivers, streams, the water table. All the water used in this technology is recycled, used over and over again. It is not dependent on a public or private source.

What about the milk?

It is cooled instantaneously. This is much quicker than conventional sheds, which must cool milk to 7deg within three hours of milking to prevent bacteria building up. Ice-cold water from a refrigerated tank passes through a heat exchanger to rob the milk of its heat. The warm water from the process is retained in a second tank. After milking this warrn water is refrigerated as it passes back to be stored as ice-cold water again. This also means that the milk can be stored longer, retains a higher quality, and does not have to be collected so regularly provided enough storage capacity.

Do you have any explanation as to why this technique is ignored here at every level right down to the farm gate – ministerial, departmental, corporate……

The New Zealand dairy herd has more than doubled in size over the last 30 years. The technological underpinning in contrast has remained unchanged. The last shift was the one into stainless steel. While everyone in the categories you describe has profited from this extraordinary growth they have been loath to invest in the infrastructure that this kind of growth requires when it impacts on the environment. Out of sight. Out of mind. In a curious catch-up in the realisation of this we now witness this atmosphere of moral panic in which politicians emit headline-grabbing solutions in extreme terms such as dietary shifts, cow-capping, peak cow etc. All these issues are also effectively dealt with by indoor barns, and incidentally better animal welfare.

When you and the late Brian Tolley developed the BioGenCool™ milking shed system 15 years ago, it was described as revolutionary……

It was revolutionary in that it anticipated the Green policies we know today in that it reduced emissions at all levels, methane emissions from dairy ponds, nitrates and E.Coli distribution, and also incidentally the need for frequent tanker collections just because milk can now be kept for so much longer. Any excess power can be fed into the national grid. Surplus solids from the digester can be used on the farm to displace inorganic fertiliser. The technique is no longer revolutionary outside New Zealand of course. It is now used in Asia on pig and poultry farms, for example and widely adopted in the USA and European dairy industry.