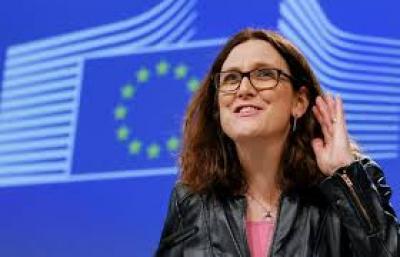 After years of discussions, the European Union is officially launching trade deal negotiations with New Zealand. EU Trade Commissioner Cecilia Malmström is headed to New Zealand this week, and spoke to Sam Sachdeva of Newsroom ahead of her visit about what the EU will get out of the deal - as well as the shaky state of international trade.

With 28 member countries, each with their own agendas, no decision comes easily for the European Union.

It was October 2015 when the EU and New Zealand first started work on a possible FTA: now, nearly three years later, EU Trade Commissioner Cecilia Malmström is heading to New Zealand for the official launch of negotiations.

Speaking to Newsroom from Brussels ahead of her visit this week, Malmström admits it took longer than expected to receive a mandate from the EU Foreign Affairs Council, but says she is keen to make up for lost time.

While improved access to the 500 million people in the EU market holds an obvious appeal for New Zealand, what the EU nations get out of the deal is less obvious; the EU’s own assessment estimates a boost to New Zealand’s GDP of up to 0.5 percent, but just 0.02 percent for itself.