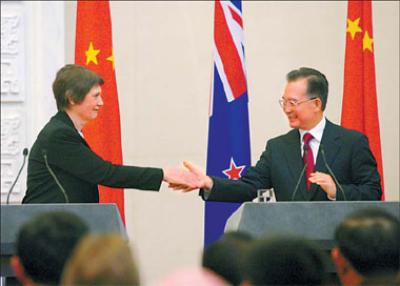 There are strong indications that the decision by the Labour coalition government to allow the Chinese water company to expand its operations in New Zealand involved the intervention of the former premier Helen Clark.

It was during Miss Clark’s premiership that was inaugurated the New Zealand/China Free Trade Agreement which has since served as a model for other such nation bilateral deals.

Inaugurated in 2008 the arrangement is widely considered to have been New Zealand’s shock absorber during the ensuing international financial bust and to have paved the way for Miss Clark’s successor National Party premier John Key to have presided over his “rockstar” economy.

The Green Party was opposed to the Free Trade Agreement.

The belief sustaining the intervention of Miss Clark is that the enthusiasm on the Chinese side has waned in recent years and at the very time that New Zealand now seeks to “upgrade” the arrangement.

The Free Trade agreement with China is in fact scheduled to have all its conditions realised next year.

A veto to the Chinese company would, it is thought, have indicated to Beijing that New Zealand’s commitment to the arrangement was similarly evaporating.

In political terms there was the danger of creating an impression, true or false, that the Green Party now had the whip hand in the coalition government.

In fact the Greens have effectively suppressed bulk fresh water shipments from rivers and outflows such as Manapouri.

The Green Party’s role in the oil and gas and coal mining vetoes is seen to have added to such an impression.

All this coincided with the Green Party’s rapprochement with coalition member New Zealand First.

In recent weeks New Zealand First has singled out the New Zealand dairy organisation Fonterra, the main commercial beneficiary of the FTA, for coruscating criticism centred on its dealings with China.

On top of this was New Zealand First’s signalling that raw log exports, a China trade mainstay, should be replaced by value added processing here.

This too added to the impression of a fading commitment to the free trade agreement.

It is hard not to reach the conclusion that someone intervened and that it was someone who had the unifying prestige and mana not readily visible within the governing coalition.