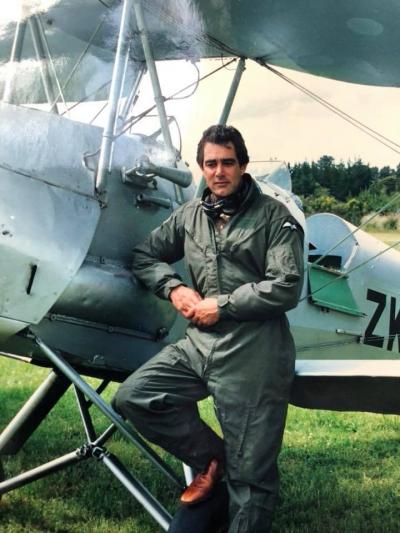 The sudden death this week at the age of 69 of Dr Wallace Metcalfe who collapsed while out shopping in Melbourne brings to an end a chapter in the era of storied South Seas physicians.

Dr Metcalfe practised for many years in New Zealand’s Wairarapa valley where he became a stalwart of the Wings over Wairarapa movement, piloting his own Tiger Moth biplane.

His practice in the nearby valley settlement of Greytown gave him ready access to Hood aerodrome.

It was here with people such as Masterton’s long time mayor Bob Francis and Wing Commander John Lanham RNZAF, often considered the world’s most enduring display pilot, that Dr Metcalfe helped lay the groundwork for what has become an internationally ranked annual air show.

Dr Metcalfe, an obstetrician, had previously practised in central Wellington.

His roots though were in Oceania, and quite literally so.

A direct descendent of the Pitcairn mutineers, his forebears arrived to take up farming in New Zealand from Pitcairn Island via Norfolk Island.

Growing up in Hicks Bay on the remote East Coast of New Zealand’s North Island the swarthy, tall, and sinewy Metcalfe, a natural sportsman, had no trouble blending in.

Indeed, throughout his career he was delighted when from time to time he overheard patients in his various waiting rooms surreptitiously describing him as the “ black chap.”

Of a candid demeanour, he had the mannerism of addressing everyone of any station and in any situation at all as if he had known them all his life.

He was to return to island life later in his career to become resident general practitioner on Norfolk Island where his practice included such luminaries as Thorn Birds author Colleen McCullough.

In the final stages of his New Zealand career, and still favouring the rural practice, he became a locum roaming over Otago and based in Oamaru, where the stone classical architecture notably captured his imagination.

It was now that he surprised friends and colleagues by moving to Melbourne from which he once again practised as a locum and again favouring off-the-beaten-track assignments.

Dr Metcalfe, known to friends and patients alike as Wally, will be remembered for his energy and ability to need but little sleep, an essential attribute in someone called out at all hours to attend upon births.

As a counterpoint to his clinician’s vocation of successfully bringing new life into the world, Dr Metcalfe was also noted for preserving what was already there in the form of his restoration work on old houses, furniture, gardens, cars and aeroplanes.

He is survived by his companion Nicky and his children.