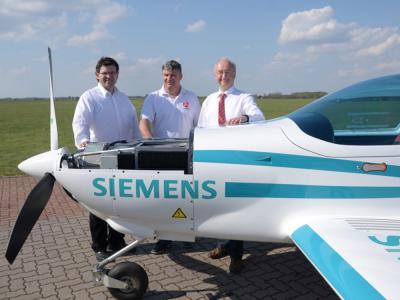 The in-air fire does prompt fears of a lithium ion battery malfunction. These batteries have had problems with thermal runaway—a chain reaction in which one battery releases heat and triggers the rest to catch fire. This problem plagues devices from e-cigarettes to laptops and is a safety concern for electric vehicles of all types.

The two-seater plane, composed of a Magnus light aircraft with a 60kW electric Siemens motor, is so quiet that a passenger and pilot can talk without headsets. Powered by racks of lithium ion batteries, stored in front of the cockpit, the little plane can accelerate quickly. This makes for a quick takeoff not unlike the ground-based Tesla's Ludicrous mode. In fact, the fully aerobatic version set an electric flight record in 2017 with a speed exceeding 340 kilometers per hour. The fully aerobatic plane delivers 260 kilowatts from the 50 kg motor. The semiaerobatic motor is half that size. Both engines have an impressive 5:2 kilowatt-to-kilogram ratio. The semiaerobatic plane can fly for about an hour, an improvement over battery power of the past but still a major limitation of electric flight. The energy density of batteries still does not allow for long flights.

Like the automotive industry, electric technology in the airline industry has been developing slowly. While airline fuel provides 12,500 watt-hours per kilogram, lithium-ion batteries provide only 160, limiting the eFusion and others like it to short commuter hops. To get enough power for longer trips or bigger planes would require too many batteries with too much weight.

Before the crash, Siemens engineers were working on improving the motor's heat exchange and shaving weight gram by gram. With rectangular copper stacked like bricks in the stator, the stationary part of the rotary engine, engineers eliminated round-wire air gaps that could interfere with heat conduction. With more efficient heat wicking to the liquid-cooled housing, there is less chance of insulation breakdown and shorts.

Siemens has spent the past couple decades working on high-temperature superconductors that could achieve almost zero energy waste through heat. Their current furniture-sized generator is much too large for use in an aircraft but has potential for cargo ships. NASA has also contracted GE Aviation to produce a cryogenically-cooled machine, but GE remains secretive about its progress.

The Need for Greener Planes

The eFusion crash comes as the airline industry most needs electric technology. The industry pumps out 2 to 3 percent of the world's greenhouse gasses. This share is expected to increase as electric cars and clean electrical gain momentum. Not only that, since airplanes release much of their gasses in the stratosphere, they have a greater impact on the greenhouse effect than ground-based polluters. Twenty-three countries have agreed to limit commercial airline carbon emissions by the year 2020, and the European Union's Flight Path 2050 report calls for a 75 percent drop in carbon emissions.

Hybrids May Be the Solution

Future battery technology may allow for greater storage, but in the meantime, the airline industry is set to follow the path of the automobile industry, with hybrids as a steppingstone. Combining electric power with combustion engines will still pump carbon into the atmosphere but can at least improve efficiency on short- and medium-haul runs. An electric boost can get the airplane off the ground while a finely-tuned fuel-burning engine provides power during flight. On existing planes, the large engines mostly idle after takeoff, dragging down the plane with extra weight. An engine optimized for flight only, without the extra power needed for takeoff, could reduce fuel consumption by 30 percent, according to NASA researchers.

Hybrid technology also opens options for airplane design. Since power is distributed by wire, propellers do not have to organize around engine placement and can be located at the back of the plane, even atop the vertical stabilizer.

Alternative Ways to Save Fuel

So far, commercial airlines have focused on weight reduction to reduce their fuel use and, consequently, their carbon footprint. The Boeing 787, eFusion and others use lighter, carbon-fiber reinforced polymers in their construction. The airline industry’s sensitivity to weight is illustrated by the following example. United Airlines switched its in-flight magazine to a lighter stock, a move that could save an estimated 640,000 liters of fuel per year.

Within the next decade, weight reduction, hybrid technology and other innovations may improve the airline industry's carbon output. As early as the 2030s, the industry may have transitioned to fully-electric planes.

“The European Union’s Flight Path 2050 aims to reduce emissions by a factor of more than 2,” states Frank Anton, head of Siemens’ eAircraft department, “but by then, passenger travel is expected to double, so we’ll need at least a fourfold improvement.”

Fonterra manufacturing site to reduce water use by 70%