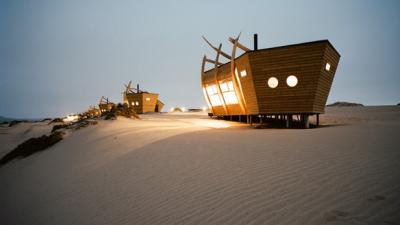 Skeleton Coast in the north west of Namibia might not sound like the most alluring of holiday destinations. Here the angry surf and harsh weather have brought down thousands of ships, whales and seals, the remains of which now litter its infamous beaches. But joining them is a cluster of luxury cabins inspired by the shipwrecked surroundings, offering unique and spooky stays between the desert and an otherwise untouched shoreline.

Shipwreck Lodge, as it's called, is a collection of 10 eco-minded cabins inside Skeleton Coast National Park, which was declared a nature reserve in 1971. These solar-powered chalets built into the dunes are designed to mimic fallen ships, with a bathroom found inside a bow-like section connected to a bedroom that, from the outside, resembles a boat hull that has tipped onto its side. . . . . .

More in this category: « En Route to Salzburg Emirates celebrates 15 years of connecting Auckland to the world »
back to top
May 25, 2018

Emirates revamps its premium offering in First and Business Class