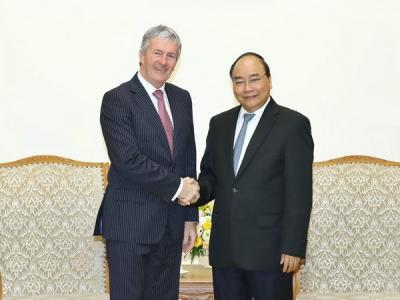 The PM welcomed Minister O’Connor, who is also Minister of Trade and Export Growth, to visit Vietnam and recalled his successful visit to New Zealand in March 2018.

He took this occasion to thank New Zealand for providing official development assistance (ODA) for Vietnam over the past time.

The bilateral cooperation potential remains huge, including the production of Vietnamese avocado for exports, he said.

New Zealand is hoped to help Vietnam organise production and create a value chain for Vietnamese dragon fruit to boost exports of this fruit to the world, the PM said.

The guest expressed his impression on the dynamic development of Vietnam and said he some working sessions with Vietnamese ministries, departments and localities to seek stronger collaboration in agriculture and other fields.

New Zealand is willing to support Vietnam in this field as well as in the management of food safety and other realms, he affirmed.

He asked New Zealand to closely work with Vietnam to host conferences between ASEAN and its partners.

The PM added that Vietnam is determined to ratify the Comprehensive Progressive Agreement for Trans-Pacific Partnership (CPTPP) in 2018 and hopes New Zealand will soon ratify this pact.

He urged the two countries to promote cooperation in trade and investment, especially increasing the bilateral trade which remains modest at present.-VNA

More in this category: « In Times of Trade War, Companies Get Creative to Avoid Tariffs Deal on China-backed mega free trade pact likely in November: Singapore »
back to top
Aug 10, 2018