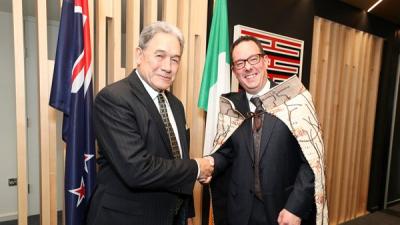 “Ireland and New Zealand are already close friends but our new diplomatic post will strengthen connections and further develop the relationship. As small island nations committed to democracy, the rule of law and free and open trade, we look forward to working well together,” said Mr Peters.

Today, Mr Peters met with Prime Minister Leo Varadkar, and also visited the Irish National Stud and The Curragh to discuss racing industry issues. While in Dublin, he will also meet with Deputy Prime Minister and Minister of Foreign Affairs Simon Coveney, and will deliver a speech at the Irish Institute of International and European Affairs.

“New Zealand has a lot at stake in its relations with Europe and people on the ground in Dublin makes sense as Europe’s architecture evolves, following the United Kingdom’s exit from the EU,” he said.

Trade between Ireland and New Zealand is growing. It was worth $509 million in the year to June 2018.

More in this category: « Announcement of appointment of new Ambassador to Spain
back to top
Oct 11, 2018

Board appointments to support innovation

Before the House Tuesday 11 September 2018

PGF invests to build economic development capability in the provinces