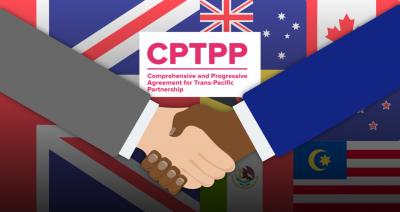 So said William H Seward, who served as Abraham Lincoln’s Secretary of State and oversaw the purchase of Alaska, a century and a half ago.

Britain is not a Pacific territory, obviously – other than in the technical sense of owning Pitcairn and its associated islands. But we have exceptionally close links with many states that are: the United States, Canada, Singapore, Hong Kong, Australia and New Zealand are common law, Anglophone states as, to a large extent, are Brunei and Malaysia and, to a lesser extent, the Philippines. Britain, in other words, is well positioned to benefit from the spectacular growth of the Pacific region.

Until now, freer trade with that region has been held out by ministers as one of the clear benefits of Brexit. Britain, we were told, would join the clunkily-named Comprehensive and Progressive Agreement for Trans-Pacific Partnership (CPTPP) which brings together 11 Pacific nations with a combined population of 500 million. The CPTPP has been described as the gold standard modern trade association – unsurprisingly, given the free-trading instincts of the two nations that first promoted it, New Zealand and Singapore.

Donald Trump, who has a different attitude to commerce, pulled the United States out of the deal, though it is of course possible that a later American administration might rejoin. His withdrawal disheartened many of the other participants who were naturally delighted by the prospect that Britain, the world’s fifth economy, might partially step into America’s place. The leaders of Japan, Malaysia, Singapore, Australia and New Zealand have all called for UK accession.

That prospect now looks impossible. A new paper published by the Initiative for Free Trade (of which, in the interests of disclosure, I am President) looks in some detail at the mechanics of UK membership. Written by two acknowledged global trade experts, Deborah Elms and Hosuk Lee-Makiyama, A Roadmap for UK Accession to CPTPP weighs up the case for British membership and comes down unequivocally in favour. Some of the benefits are vast and obvious. British (that is, EU) beef exported to Japan is currently subject to duties of 38.5 per cent; dairy exports to Canada can face duties as high as 250 per cent.

Under what form of Brexit might Britain join? In all circumstances except one. Britain could join the CPTPP in a no-deal scenario, with a Canada-Plus treaty, as an EFTA or EEA member and even, with some qualifications, under Chequers. But it cannot join while it remains in the customs union – which everyone in Brussels understands the proposed deal to mean, though membership is sold in Britain as temporary.

How inexplicable – and how shameful – that Britain has thrown away perhaps the least controversial advantage of Brexit. Before the referendum, almost no one defended the EU’s customs union, which penalised poor countries and hit Britain uniquely as the sole member that traded more outside than within the bloc. Now, this worst-of-all-worlds outcome is preposterously presented as some sort of compromise.

A good case can be made for compromise – for being, as the saying goes, half-in-half-out. That, broadly speaking, was how the referendum went. But we should have aimed to keep the good half and junk the bad half. Leaving the EU but keeping the customs union is, as the IEA’s Kristian Niemietz puts it, throwing away the burger and eating the napkin. What fools we look. What fools we are.

More in this category: « UK trade minister says 'no deal' Brexit more likely than not EU leaders take 38 minutes to sign off on Theresa May’s Brexit deal… »
back to top
Oct 10, 2018