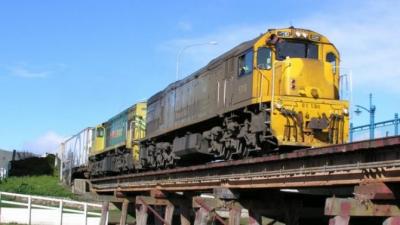 The Waikato-Tainui owned Ruakura inland port development has taken a major step forward with the announcement today of a joint venture partnership with a world-class port operator.

The tribe’s commercial company Tainui Group Holdings (TGH) and LINX Cargo Care Group have joined forces to develop and operate the new port, which is currently under construction and expected to bring significant economic return to Waikato-Tainui and the region.

LINX Cargo Care Group and one of its subsidiaries, C3 Limited, New Zealand’s largest on-wharf logistics company, are owned by a Brookfield Consortium which brings together global experience in port operations and infrastructure development.

“Waikato-Tainui is an inter-generational investor. What we achieve today will reverberate for generations of our mokopuna. LINX brings not only significant expertise in port development and operation but also a long-term vision that matches our view of the positive environmental, social and economic advantages that must and will come from this project,” she said.

TGH Chief Executive Chris Joblin said the conditional agreement reached this week will bring the full force of LINX Cargo Care Group’s world class experience to bear at Ruakura through a new joint venture to develop and operate the port.

“We are delighted to confirm this agreement with LINX Cargo Care Group following a comprehensive RFP process over the past ten months which attracted expressions of interest from seven potential port operators,” Mr Joblin said.

“LINX and C3 share our long-term vision to help transform North Island freight flows, driving new levels of productivity, efficiency and speed to market for the rapidly growing export and import community in the golden triangle of Auckland, Hamilton and Tauranga,” he said.

Waikato-Tainui will continue to own the land on which the Ruakura Inland Port is built, and benefit from ground lease payments for its use.

Anthony Jones, Group CEO for LINX Cargo Care Group and Chairman of C3 said the transformative nature of Ruakura was a major attraction.

“Ruakura will be transformational for the New Zealand logistical supply chain. It will offer stable, efficient and cost effective networks for importers and exporters to grow with confidence in the future. We are extremely excited to be part of this project for New Zealand’s North Island communities, which will deliver long-term benefits such as safer roads, employment opportunities and reliable inland transport networks,” he said.

In addition to the range of services Ruakura will provide to the region’s exporters and importers, it has the potential to support 6,000-12,000 jobs within the precinct once fully-built.