We are building a global brand, it's not just about selling apples. 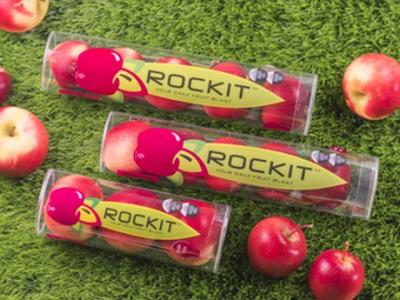 Rockit has always been promoted as an innovative snack product, and is not to be confused with a commodity apple.

This year has seen a lot of significant changes for Rockit apples: new private equity investors, new board members and a new CEO writes Nicola Watson for FreshPlaza

"It has been quite a watershed year for us," explains new CEO, Austin Mortimer. "It was time for changes within the company, the board and the founder of Rockit had different views as to the direction that the company should go in. It was determined that one side would buy out the other. The shareholder group raised the funds by introducing private equity to buy out the founder."

Rockit has always been promoted as an innovative snack product, and is not to be confused with a commodity apple.

"We want to define our position in the market place more clearly. We see other channels available to us other than mass retail or grocery. Small convenience stores, for example, and the "grab'n go" section of small retailers where the shelf space is more and more being given to healthy snacks. We see our two or three count tubes sitting nicely in that space alongside the hard boiled eggs and muesli bars. The tube supports the idea of it being ready to eat and of course, being an apple, it is healthy."

Austin says that most of the sales just now are made with 3,4 and 5 count tubes, but they are trialling a two piece for vending machines and a one piece for airline and hotel services. He believes the packaging on the small apple will assure people that the apple is clean and fresh.

"Rockit is currently grown in 9 countries and we are considering whether to plant in South Africa and Chile," said Austin. "You need to look at which markets you would serve with the production in there. Apples are mainly grown for export in those countries, Chile exports to the US and South Africa to Europe and since we already have production in both there is not a big need to grow in Chile or South Africa, although Africa is a fast growing market."

80% of Rockit apples grown are within the standard size, there are a number of diameters which cater to the majority of a standard Rockit tree.

"The taste profile is also important and while there are differences between different growing regions, these are not insurmountable," according to Austin. "Most of the Rockit apples are grown for their domestic markets so consumers get a stable taste profile. It is different in markets in Asia, where we need to have several sources to get a year round supply, we hope that with strict quality control we can keep the taste as stable as possible."

In Europe and North America the number of licences issued to grow Rockit apples are for a certain number of trees and the licensees are close to the limit of what they can plant. In New Zealand it is different, according to Austin, the new private equity investors are quite bullish about the opportunity and it is his intention to plant quite a bit more trees.

"It is significant for New Zealand that private equity have bought into it a traditional business, particularly one which is considered high risk in terms of horticulture. They see that we are building a global brand its not just about selling apples. They obviously see a lot of potential, it just goes to show that you can add value to what was a commodity."

"We have no reason to doubt the market for the Rockit apple, we have sold out every year. In 2017 we sold out 10 weeks earlier than ever before, with 40% increase in volume."

The Rockit apple is on the shelves in around 29 different countries, and the next target market is Japan where they hope to start sending apples in 2018.

Austin reckons that the reason the Rockit apple is popular on the Asian market is because it is very sweet and people are happy to eat a smaller apple.

"The feedback we have had from our research in Japan, where you get some very big apples, and demographics tell us there are a big percentage of people who live on their own and also a lot of older people. These people do not want a big apple which they can't finish and just end up leaving most of it. Also our experience from the countries which we are already selling in, is that because it is red and very sweet and crunchy, size doesn't matter, in fact they're more accepting of the smaller apples."

More in this category: « T&G Global looks to sell food processing T&G Foods unit Biosecuirty week to spread awareness on how to keep pests out of New Zealand »
back to top
Jun 27, 2018