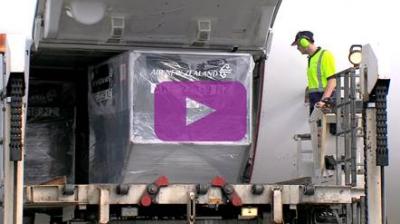 9 Nov 2017  -  Air New Zealand is rolling out new tracking technology which will allow the airline to more easily track and analyse the movements of cargo shipments and its cargo equipment worldwide. The airline is currently installing more than 5,500 Bluetooth® tags on its cargo containers, pallets and unit load devices as well as more than 100 readers at 29 airports it provides cargo services to around the world. When a tagged item passes the reader it automatically updates an online application providing real time information to the team. Air New Zealand General Manager of Cargo Rick Nelson says the technology is expected to drive enormous efficiencies for the airline. “This technology has been introduced as a result of direct feedback from our cargo and airport staff who saw an opportunity to enhance our handling processes. These Bluetooth® tags and readers will not only allow us to speed up cargo handling but also improve our accuracy and inventory management and help to locate any missing items,” says Mr Nelson. The airline has been working with Core Transport Technologies Inc on the technology which has been designed and manufactured in New Zealand. “We believe this to be the first time this type of technology has been deployed at this large scale anywhere in the world. It’s great to see our technology benefitting Air New Zealand and its many cargo customers and we look forward to continuing to work with the airline to further drive efficiencies,” says Core Transport Technologies Inc Managing Director Ian Craig. While the technology is only being used internally at this stage, the airline hopes to make it customer-facing in the future. “We see significant potential for this technology – it could be rolled out at airports to monitor ground service equipment, or used to manage mail shipments and eventually we would like to see it become customer facing so our cargo customers can more easily track their shipments,” says Mr Nelson. Air New Zealand Cargo plays an important role in growing New Zealand’s high value exports, processing the majority of the country’s air freighted imports. The airline operates an average of 3,566 cargo flights per week and exports a total of 42,000 tonnes of goods from New Zealand annually. Click here to download broadcast quality footage on Air New Zealand’s new cargo tracking solution.