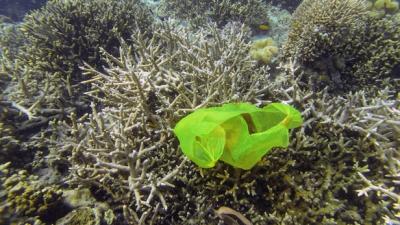 Dec 12, 2017  -  Considering we pump millions of tons of plastic into the oceans every year, there is a hell of a lot we don't know about its whereabouts and its impact on the marine environment. A study examining how the material is torn apart by ocean life has uncovered some eye-popping evidence, finding that a single plastic bag is literally broken into millions of microscopic pieces before being spread throughout the seas.

It's hard to overstate the gravity of our plastic problem. Recent research tell us there is somewhere between 4.8 and 12.7 million metric tons of the material washing into the oceans each year. But what makes all that trash so hard to track is that it is broken down into microplastic fragments that are smaller than the fingernail on your pinky.

Scientists say they have been able to account for roughly one percent of all plastic waste in the ocean, but there is still so much to learn about where it all goes after being swept away from open dumps and improperly secured landfills.

Looking into such matters is a team of marine scientists at the University of Plymouth, who conducted a study to learn more about how quickly different types of plastic are broken down by marine organisms, and whether the rate of degradation was impacted by biofilm (a layer of organic material that builds up on the plastic over time).

The team observed how the amphipod Orchestia gammarellus, which lives in coastal areas of northern and western Europe, broke down plastic bags. Through monitoring in the lab and along the shoreline, the scientists found the crustacean could tear a single plastic bag into 1.75 million separate pieces of microplastic, with the debris then found in and around their excrement.

The type of plastic, whether conventional, degradable or biodegradable, was found to have no impact on how quickly it were consumed, but interestingly, the presence of biofilm speed things up by four times. This throws further weight behind a growing body of research that suggests marine life can be enticed by ocean debris at mealtime, particularly when there is natural matter building up on its surface.

For example, a study last year found that seabirds were mistaking plastic debris for food because organic compounds were giving off a familiar stench. Within just three weeks, plastic samples placed in a contained environment had become coated in a sulfur compound called dimethyl sulfide (DMS), which happens to be the same compound (and smell) that the birds usually relied on to find krill for dinner.

"An estimated 120 million tonnes of single-use plastic items – such as carrier bags – are produced each year and they are one of the main sources of plastic pollution," said Professor of Marine Biology at Plymouth University Richard Thompson. "They already represent a potential hazard to marine life, but this research shows species might also be contributing to the spread of such debris. It further demonstrates that marine litter is not only an aesthetic problem but has the potential to cause more serious and persistent environmental damage."

The research was published in the journal Marine Pollution Bulletin.

More in this category: « Battle brewing over water treatment cost The Creators Of This Algae Plastic Want To Start A Maker Revolution »
back to top
Aug 09, 2018