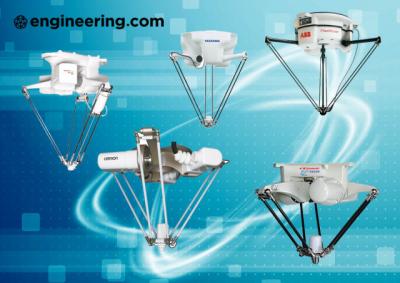 In the design of robotic systems, engineers often look to the musculoskeletal structures of animals and humans to develop their designs. After all, if you are designing a robot to perform tasks usually done by human arms and hands, robotic arms and hands are a good starting point.

What makes the delta robot fascinating is that it represents a complete departure from the constraints of biomimicry. It’s an efficient, optimized machine, inspired not by nature, but by pure mathematics and geometry.

Isaac spoke with experts from ABB, FANUC, Kawasaki Robotics, Omron and Yaskawa Motoman to learn the nuts and bolts of these fascinating robots, from best use cases to most common failure modes. I also spoke with their inventor, Dr. Reymond Clavel, for his unique perspective on the machines' early development.

Today, delta robots are well established in the automation industry. Unlike larger articulated arms, delta robots are often kept as a stock item at many manufacturers such as Yaskawa Motoman and ABB. But in 1985, few robots could perform light pick-and-place tasks quickly or repeatably.

Reymond Clavel and his team at the Robotics Systems Laboratory at Ecole Polytechnique Federale de Lausanne (EPFL) began the research that would produce the delta robot following a visit to a chocolate factory. Clavel’s team was looking for repetitive labor applications for robots, and they found that the packaging of chocolate pralines was a candidate for this type of high-speed, low-payload automation.

Clavel’s team began by setting constraints on their design. First, the robot must perform at a rate of 3 picks per second. In order to place the chocolates correctly, the mobility of the robot required 4 degrees of freedom: translations along 3 axes, as well as rotation about the vertical axis. In order to achieve a high rate of work, Clavel added two more constraints to the design: the actuators of the robot would be fixed on the frame, and the moving part of the robot would be kept as light as possible.

More in this category: « Techweek to showcase NZ’s world-leading inventions MITO supports EVolocity secondary school programme »
back to top
May 22, 2018