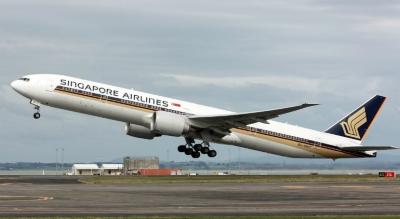 Responding to the rapidly growing demand of the Indian market, Singapore Airlines is now servicing North Indian city of Amritsar.

Mr Goh, who is based in Sydney, and was in Auckland this morning to provide an update on Singapore Airlines’ results and new product roll-out, expressed satisfaction with the global business growth of the aviation giant.

“We believe that we have right products and strategies in place to service our existing markets and develop new routes all around the world,” Mr Goh said.

Speaking on occasion, Mr Turcotte said, “Along with servicing major travel destination, we are continuing our efforts to reach out to more tier-II and tier III level cities in the target market to fulfil the growing demand of our passengers.

In this endeavour, the opening of Amritsar route would be a major gift for the huge Punjabi community residing in New Zealand, and business travellers who have growing business interests in northern regions of India.

“We are looking to service Amritsar through Scoot, which is Singaporean low-cost long-haul airline owned by Singapore Airlines through its subsidiary Budget Aviation Holdings,” Mr Goh said.

Scoot had launched flights in June 2012 on medium and long-haul routes from Singapore, predominantly to China and India.

Initially, Scoot's fleet consisted of Boeing 777 aircraft obtained from Singapore Airlines, which is now gradually being upgraded with the inclusion of Boeing 787 Dreamliner aircraft in its fleet from 2015.

Tigerair was officially merged into Scoot using Tigerair's air operator's certificate (AOC) but retaining the 'Scoot' brand, and is now based at Singapore Changi Airport.

Mr Goh and Mr Turcottee also told the media about plans when 787-10 aircraft would start operating in New Zealand airspace.

Among other key announcements, important was the better opportunity for passengers to control their in-flight entertainment experience.

"With these changes, passengers would be able to download apps in advance and choose the selected in-flight programs that they will like to see during their travel," Mr Turcotte said.

More in this category: « Surfboards can go to Bali for free Honolulu Airpport (HNL) to rename terminals and replace all signage tonight »
back to top
May 02, 2018