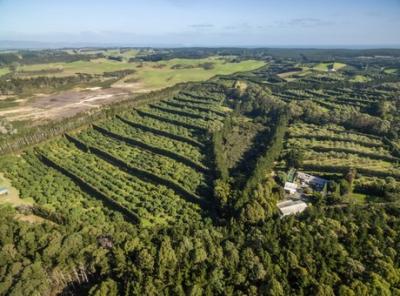 The 29 hectare property at Awanui just north of Kaitaia was originally established by Californian-based owners in 1990. It was planted with Hass on Zutano and Duke 7 avocado varieties grown on some 20 hectares of plantation land.

Crop from the orchard was exported to North America throughout and 1990s and into the 2000s before its absentee North American owner changed production focus to be more New Zealand-centric. The Awanui landholding is part of a multi-national avocado producing empire which had fruit sourced from New Zealand, the USA, Peru and Chile.

Now the plantation and supporting infrastructure at 419 Paparore Road is being marketed for sale by tender through Bayleys Whangarei, with tenders closing at 2pm on June 21. Bayleys Whangarei rural sales specialist Vinni Bhula said that in the 2015/2016 season the orchard cropped 101,939 kilogrammes of avocado fruit. Although the production is not significant, some blocks could be kept for cash flow purposes while redevelopment takes place on the balance of the property.

Mr Bhula said that when operating at full capacity, avocados were harvested, graded and packed onsite with fruit being sold on domestic and international markets for retail.

“However, the orchard has come to the end of its productive life-cycle in its current format and is now due for redevelopment – mirroring what has been seen with other established avocado orchards in the area dating back to the early 1990s,” he said.

“Redevelopment consists of removing the old trees, breaking up the soil substructure, adding fertiliser where appropriate, installing drainage, and replanting new root stock at a higher density with new avocado clone varieties which become more productive at a younger age. New stock for this process is highly sought-after – with up to a three-year waiting list for avocado trees from approved nurseries.

“Under the replanting option and securing new root stock relatively swiftly, the Awanui orchard has the potential to be quickly re-established to produce a new crop within three years, and ultimately delivering a crop of between 45,000 – 50,000 trays of avocados within eight years.

“Alternatively, the land could be converted into berry fruit production as the property is segregated into 30 blocks surrounded by established Pinus Radiata shelter belts for protection from adverse weather.”

A comprehensive catalogue of horticultural infrastructure buildings linked to the property is also featured in the package, and includes:

• Some 160 square metres of storage and workshop sheds

• A water bore and pumps, and

Irrigation on the property comes from a consented 79 metre deep six-inch bore with consent to draw up to 80,000 cubic metres of water annually. Water is circulated across the crop via a fixed sprinkler system.

“The Far North has been well-recognised for its early season avocado production due to its favourable warm climate with an average rainfall of 1080mm annually average annual temperature of 16.2 degrees Celsius, combined with sandy and peaty soil types. This has seen a surge in the growth of new medium to large-scale avocado orchard developments over the past decade,” Mr Bhula said.

“From this perspective, the Paparore Road operation would complement an existing large avocado-growing operation which could exercise economies of scale through utilising existing other more modern packhouse facilities and converting the packing shed on site into a short-term, crop-holding amenity.”

Machinery and chattels for sustaining the horticulture business - including two motorised hydra ladders, three tractors, a sprayer, and commercial-grade wood chipper – are included in the land and buildings package offering for sale.

New Zealand has some 1400 commercial avocado growers – with most production taking place north of the Bay of Plenty and delivering crop year-round, with the biggest volumes coming during the summer months, Government statistics show avocados are the third largest fresh fruit export from New Zealand.