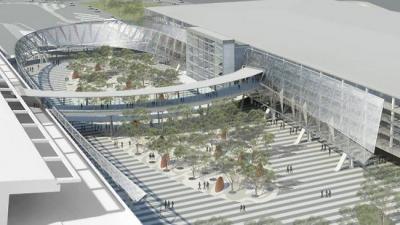 Adelaide Airport is starting work immediately on a AUD 165 million expansion of its main terminal that will significantly upgrade international arrivals and departures, as well as creating more retail and dining options for both domestic and international travellers.

The move has been hailed by airlines, by the travelling public and by the Australian Airports Association (AAA).

Having received the green light, the airport will focus on improving the arrivals and departures experience for international passengers. Watpac has been appointed as the project builder, and is expected to move on site within the next two weeks. The project completion date is 2021.

In a statement yesterday, the airport said international upgrades would include a second, longer baggage belt for arrivals, more space for emigration and immigration processing, expanded security screening, a larger duty free precinct for arrivals and departures, and expanded dining and retail options.

The expansion will also see a complete refurbishment of retail areas, expanding by over 80% the overall size of the terminal’s retail and dining precinct across domestic and international areas.

Adelaide Airport managing director, Mark Young, said the terminal expansion would ensure the airport provided the highest level of customer experience for all travellers well into the future.“Our aim is to provide a seamless, connected experience from the time you drive into the airport until you board your aircraft, and vice versa,” he said.

“The airport experience is an important part of our guests’ overall travel experience and the terminal upgrade will only further enhance the ground experience for our guests travelling through Adelaide,” he said.

“This is great news for South Australian travellers and the many businesses that rely on the local tourism industry,” she said.

“With international passengers travelling through Adelaide Airport almost tripling since 2005, it’s clear there is strong interest in what South Australia has to offer tourists seeking unique experiences.

Wilkie said the expansion would ensure the terminal could meet the changing needs of both passengers and airlines.

“Adelaide Airport has worked very closely with its partners to deliver a design that will provide efficiency for airlines, while making the passenger’s journey through the airport an easy and seamless one,” she said.

More in this category: « Qualmark New Zealand, has appointed Gregg Anderson as its new General Manager. The great numerical majority of Israelis are secular and non-observant. »
back to top
Apr 19, 2018