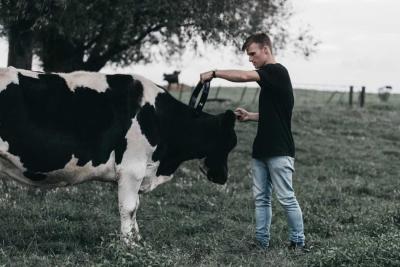 Craig Piggot from Morrinsville is making waves in the agritech world with the award-winning idea behind his company, Halter. The solar-powered, GPS-tracked collar self-herds cows while gathering data about their behaviour, emotions and health and sending it to the farmer’s phone.

It recently just raised US$8 million in capital in Silicon Valley from Peter Thiel’s Founders Fund, and Rocketlab’s Peter Beck has dubbed it a ‘billion-dollar idea’. Could this be the future of farming?

Fenceless farming, safeguarding our waterways and freeing up to three hours of farmers’ time per day via technology is the sales pitch behind Halter. And if its investors are anything to by, it’s a pretty good sales pitch at that.

Financial backers of Halter include founder and CEO Craig Piggott’s former boss at Rocket Lab, Peter Beck, Stephen Tindall’s K1W1 fund and the Peter Thiel-led Founders Fund, which has invested in companies such as Facebook, Spotify, SpaceX and Airbnb.

It’s an impressive feat for Piggott, who’s in his twenties and grew up on a 300-cow dairy farm in the Waikato. He was in the midst of a first class honours engineering degree and working at Rocketlab when inspiration struck – why not make a collar that can track cows’ behaviour, emotions and health and herd cows into the right place remotely via sounds and vibration? . . . .

More in this category: « State of the art robotic technology installed at Alliance Group plant Benefits of sheep milk to be tested in ground-breaking trial »
back to top
Aug 28, 2018