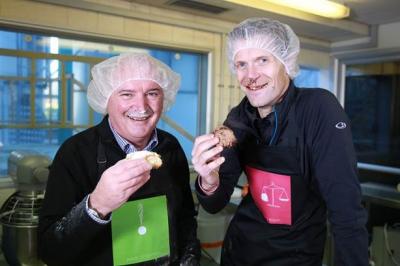 Muddy Buns, Dirty Dirty Bread, or Zang Zang Bao as they’re known in China, are creating a social media frenzy and driving a further craving for butter around the world.

Fonterra Edgecumbe is all geared up to handle this global trend and is commissioning a new butter line which will nearly double the factory’s butter sheet production from 4,500 metric tonnes to 7,000 metric tonnes.Fonterra General Manager Marketing, Global Foodservice, Susan Cassidy says “The Dirty Dirty Bread can best be described as a chocolate croissant. People love the flaky chocolate pastry that’s coated in rich chocolate ganache and sprinkled with cocoa powder.“It makes it impossible to keep your face clean while eating. They are popular with celebrities who have taken to social media to share images of their ‘muddy bun face’ experience.”Ms Cassidy says demand for butter is as strong as ever. People want natural products and they are prepared to pay for them. And that’s why global butter prices, including here in New Zealand, are continuing to rise.“Even in temperatures of minus ten degrees, crowds of people are queuing for hours to get their hands on their Muddy Bun.”Edgecumbe’s Operations Manager, Allan Muggeridge, says the first butter sheet will roll off the new butter line on September 1.“We’ve been watching demand for butter build for a number of years now. The building part of the project started in May so it’s been a quick turnaround to get it up and running,” says Mr Muggeridge.Fifteen local contractors have been employed to complete the expansion at the site, which employees 380 people. “It’s been a real boost to the local business community, especially after the rough past 12 months Edgecumbe has had,” says Mr Muggeridge.

More in this category: « Demand for local mushrooms on the rise over winter Alliance Group’s new premium beef product wins international award »
back to top
Mar 02, 2018