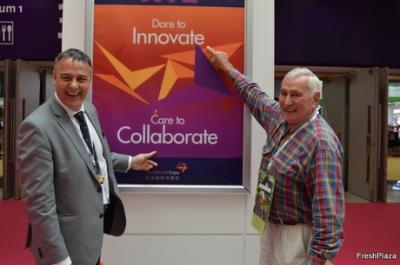 Marcus Wilkins senior with his son at Asia Fruit Logistica

New Zealand kiwifruit grower Marcus Wilkins is looking offshore in an attempt to see the variety, which bears his name, finally start the journey to reach its full potential in the global market.

Mr Wilkins and his wife say they were given the world's first kiwifruit 'plant breeding right', after discovering it in the mid-1980s, but every attempt to have the "Wilkins Super" variety commercialised, marketed or sold has not been approved by Zespri (previously the Kiwifruit Marketing Board). Under New Zealand legislation Zespri has sole rights to export the kiwifruit grown in the country anywhere in the world.

"I have had more than 30 years of this, and shed many a tear," Mr Wilkins said. "They will tell you that they tested it in the market, it doesn't store well and there was no market acceptance."

But he believes that he has found out otherwise, confirming that he is exploring ways to grow the fruit outside New Zealand, outside of Zespri's control.

"That's what we are trying to do now," Mr Wilkins said. "We managed to get plant material out of New Zealand before Psa, so the plant material is available in countries in the Northern Hemisphere. That's why we are here (at Asia Fruit Logistica), as the last roll of the dice."

He adds that the "Wilkins Super" kiwifruit, started out as the Hayward variety, but developed as mutation spore with different behaviour, appearance and shape than the original. Mr Wilkins says he has been fighting, unsuccessfully, to have it marketed as a separate variety.

Small shipments of the fruit were sent to Japan before the introduction of the board in the late 1980s, which he says had positive feedback.

"The Japanese had a trial for taste for their market - and the Japanese perceived the Wilkins as sweeter," Mr Wilkins said. "But it was never recognised by the authorities. They would say do another one, do another one, and we never heard any more about it. The interesting thing was in the first few years of regulation, the importer who had the variety, kept coming back to the exporters to get it again - but the answer was no."

The 83-year-old says changes to the law allowed for collaborative marketing; although it only covers 1-2 per cent of the crop, it at least provided him an outlet to get the product to market through Seeka.

However, he added the downside of collaborative marketing is that it is a system where approval is only granted for one year - so there is no opportunity as an exporter to develop a market, and he does not know year by year whether it will be accepted by Zespri.

Seeka actually helped us out by taking it up to China," he said. "Seeka got a premium marketing it as Green with their own marketing program and brand. The rules will generally regulate your price rate, how much volume you can sell, what channels you can use – and despite all that, Seeka still got a premium. That was interesting because of the Zespri documentation saying it didn’t store well, was ugly and no-one wanted to buy it. We do know it will store, we actually have some in cool store at the moment. The premium amounted to around NZ$500,000 over the time Seeka ran the program. That did not come to us as growers and owners of the variety but went to the Zespri grower pool!"

In comment Oliver Broad, Communications Manager for Zespri said, "Zespri has supported a sales programme with the Wilkins variety this year in the markets of Singapore, China and East Malaysia. That programme has gone well and the circa 95,000 trays supplied are now almost all sold."

Mr Wilkins said that the volume was 65,000 trays and that, “The return was average, we did not get a premium return as we did when it was marketed by Seeka.”

"Zespri has been given a privileged position by the NZ government and NZ Growers have done a great job by paying for a powerful brand to be built on the back of that privilege. Zespri Directors and Management don't need to abuse that privilege and create this climate that crushes independent thought and innovation," Mr Wilkins concluded.

For more information: Marcus WilkinsThis email address is being protected from spambots. You need JavaScript enabled to view it.

More in this category: « Apple and stonefruit industry members encouraged by the release of some plants - but still a way to go How a New Zealand family made tomato growing their passion »
back to top
May 04, 2018