Taliban Used Guilt to Dupe United States and its Allies 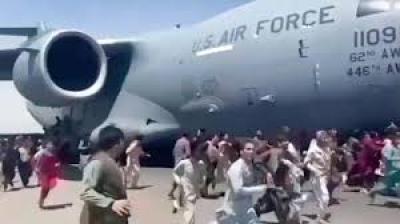 The Taliban understood the total preoccupation of United States influencers with their need to exhibit a revulsion for colonialism and imperialism. The Taliban knew that given this constantly-expressed righteousness they would be believed in any undertakings they gave over the United States withdrawal from Afghanistan.

They knew that the political class requirement to display at any opportunity at all this contempt for a colonial past outweighed other contemporary human rights attitudes, most notably even those centred on women, and especially their education.

It was hardly even a coincidence that just prior to the United States withdrawal from Afghanistan that its military high command had itself become preoccupied and thus diverted by issues such whether or not teachings as critical race theory should be integrated into career training.

Overlooked remains the way in which the Taliban exploited the United States cultural class guilt about a perceived colonial history by using it as a psychological weapon to erode confidence in the US presence in Afghanistan as an occupying power i.e. neo-coloniser.

It managed to place in the New York Times a produced piece claiming that really the Taliban only wanted to be like everyone else. It was perhaps the greatest propaganda coup in wartime history. Yet the way in which it revealed the Taliban mastery of the United States invented pr techniques went unobserved.

None more so than Australia, an immigrant nation and one much more recently colonised than the United States and with a proportionately even greater imperialist remorse industry.

Here an attenuated government inquiry into alleged war crimes in Afghanistan has become part of the rhythm of public life. It flares up now and then into wider consciousness over things like campaign medals and official public notices designating appropriate counselling services.

The effect of the Taliban in adapting modern spin techniques against the inventors and exponents of those same techniques is itself an adaptation of the exercise of eastern martial arts.

It is that of using as a weapon against an opponent the very strength superiority possessed by that opponent.

Indications keep growing that United States officials believed that the withdrawal would be an orderly one.

Why were US coalition listening posts closed down prior to the withdrawal? Ever since the imperial era of the Romans the dangers of being ignorant of what is going on beyond your own front lines has been understood.

There remains the worry for the United States and also for its allies, especially those in the Five Eyes category, as to how there appeared to be this conviction that a scheduled withdrawal from Afghanistan was going to be measured in months rather than days.

Can this horrifying miscalculation be sheeted home perhaps to Centcom? What about the CIA whose hand has sometimes been less than sure in tribal societies? What about the NSA? Then of course where were the already distracted Joint Chiefs?

What remains though is the way in which the notion of an orderly withdrawal permeated from the Oval Office all the way through to an already distracted allied coalition.

Why was the Taliban so certain that the US and its occupying coalition would believe what the Taliban told them?

There are already indications that the US administration in raptures of post imperialism ideology was as part of a scheduled withdrawal contemplating aid packages of the type afforded to Germany after World War 2.

History in the region is rather more severe. When Islamists command a country they do so under Sharia, a methodology always deadly to the western interpretation of human rights.

The Taliban effectively sowed confusion in the United States. It did so by applying pr techniques to lever on the need, the craving, of opinion-formulating society elites there to politicise its abhorrence of colonialism, and do so demonstrably.

The Taliban understood also that this moral requirement, an historical one, trumped (it is the only word) other face value seemingly superior imperatives such as those centred on free speech, womens rights, and gender classifications.

How did they achieve such an insight into this mind set? Then understand how to apply it?

A clue is contained in the Taliban New York Times placement coup.

In marketing an enduring rule is to tell the target audience what you believe that it wants to hear.