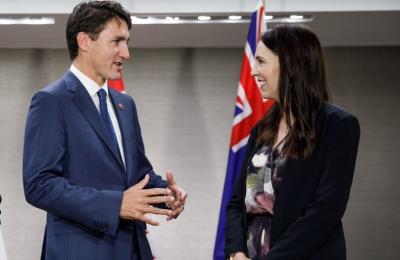 Justin Trudeau and Jacinda Ardern are the Commonwealth’s joint viceroys of virtue signalling. Yet a protest convoy from prime Minister Trudeau’s Ottawa fetched up a world away in prime minister Ardern’s Wellington causing it to become paralysed also.

How could these two leaders, the most accomplished and demonstrative cultural warriors, have become so effectively targeted by a protest that began in the bailiwick of one, and then ground to a disruptive halt in the capital of the other, Wellington?

At the height of their powers both these leaders could have appeared on a balcony and through the force of their mere presence have quieted the throng by intoning words to the effect that they felt its pain.

The soothed and hitherto unruly gathering thus implored would have quietly dispersed absolved and purified.

Mr Trudeau is often described as the “wizard of woke,” yet so serious was the threat in his capital, Ottawa, that he had to be spirited away to a place of safety.

The convoy protest conducted as it was on a widely dispersed global axis has introduced a new appraisal of the mechanics of the culture wars as a political instrument.

The Ottawa-Wellington mob scenes represent the clearest indication yet that the exponents of virtue signalling must be seen in themselves to be flawless, the personification of perfection.

In Wellington for example the demonstrators were drawn from precisely the same demographic that Miss Ardern pledges to protect and enhance.

At first Jacinda Ardern’s handling of the pandemic dramatically boosted her standing. Government health agencies successfully cauterised early outbreaks by what was described as cluster management.

Ever the politician Miss Ardern fed what became in the mainstream media an attitude toward her of unrestrained mystical reverence. One that was unsustainable.

She introduced each official broadcast clinician medical briefing with a demonstrably political and long winded monologue in which New Zealand’s progress in containing the pandemic was compared with the more sluggish performance of the rest of the world.

For Justin Trudeau the unravelling of the seamless cloak of perfection picked up speed after the release of a series of photographs showing him in fancy dress black and white minstrel mode. The hysterical reaction to this within Canada baffled the rest of the world.

After all he was a former drama teacher known to have an extensive repertoire of national costumes the better to demonstrate his own willingness to blend with ethnic communities and their aspirations.

Both countries share an underlying separatism made manifest by an emphasis on dual languages.

Both countries share a dominant issue in placating and appeasing separatist fissures. Both nations share the pandemic the containment regulations surrounding which provided the convoy movement its face value purpose.

There were lockdowns. Yet still the virus twisting and turning in its mutations defied orderly and methodical standard medical practice. Miss Ardern now rationed her podium exposure.

In both Ottawa and Wellington the motorised insurgents clamour to be recognised as victims of the government imposed measures to contain and eliminate the virus.

The premiers of both countries decline to “engage” with them. Both premiers can be described as socialists. Usually the insurgents would be the exact group category that the two premiers would wish to “engage” with in order to flaunt their common touch.

The two prime ministers share something else. Canada and New Zealand have the most biddable, the least excitable populations in the Anglosphere if not the world.

For Miss Ardern the most worrisome element of the horde surrounding and blockading parliament buildings is this. A media as recently two years ago in a state of thrall under her tutelage seems now to be conceding that the protesting throng might just have a point.

Both premiers became dazzled if not blinded by the way in which in foreign media they were consistently portrayed as secular saints.

Foolishly they failed to understand that this sanctification is in pursuit of the highbrow media’s own requirement to lock in and expand its own privileged audience as much as it is to enshrine any colonial prime ministerial save the worldliness.

The Ottawa and Wellington experiences shed a new light on what until even a few weeks even days ago was viewed institutionally as the unchallengeable formula for political pre-eminence which was to follow the approved globalist rule book of Reset.

We can now start to see that this formula works only if its proponents are themselves viewed as all seeing and all-knowing practitioners of stately virtue. Avatars of human perfection in other words.

As it is both these prime ministerial fallen angels, doctrinaires of diversity, have about them now the aura of being all too human.

More in this category: « Boris Johnson Eco Zeal Traced to New Zealand Ottawa Wellington Truculence About Class Not Culture »
back to top
Mar 11, 2018