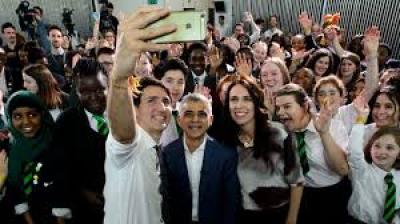 The anti-government protest convoy that in succession jammed the parliamentary centres of Canada and New Zealand also jammed the resonance from these two capitals of a globe girdling priority on defeating race-based social justice and imposed victimhood.

How was it that these two ultra-progressive governments were hosts to the turning point in public protests in which class imperatives replaced cultural motivation?

Neither of the left leaning governments the one in Wellington and the one in Ottawa could ascribe the convoy action to a cultural conflict. The acid test came in Wellington where in a cat-barks-at-dog display university students lodged formal protest against convoy participants for blockading their access to their own Victoria University.

The convoy action smeared the reputations of Canada prime minister Justin Trudeau who was forced to expel the protesters by invoking extreme wartime emergency measures.

New Zealand prime minister Jacinda Ardern whose motto is “Be Kind,” found herself subject to unparalleled personal invective while touring the nation’s South Island, usually a place of tranquillity in any public debate in anything at all.

One answer for the about face might be that the culture wars are considered to sap the sinew of a real war.

For example there is now a solid body of evidence that the United States high command was in fact so preoccupied by identitarian issues, notably critical race theory, that it was diverted from the operational reality of the evacuation of Kabul.

On the climate front we find that Russia has much of Europe in an energy supply stranglehold which came about as EU nations used net zero and other such slogans as an excuse not to invest in their own energy sources.

Similarly climatism in the form of the massively promoted COP26 in Glasgow became an inconclusive sideshow in spite of its heavyweight proponent British premier Boris Johnson, a climate convert through marriage, investing so much political capital in it.

These elements became compounded when John Kerry the United States special envoy on climate remonstrated against Russia’s imminent invasion of Ukraine on the grounds of its negative effect on emissions.

A dutiful mainstream media already terrified to probe into the pandemic’s origins now deliberately failed to see that the invasion followed in the immediate aftermath of the Beijing Winter Olympics, a keystone of China’s own internal propaganda even if it failed to grasp the imagination of the rest of the world.

The convoys attracted from the two leaders a certain undergraduate pique. In full graduate flight Justin Trudeau described his occupiers as misogynists and racists and science-deniers as a 'fringe minority' who 'hold unacceptable views,' and as 'a few people shouting and waving swastikas reinforcing this with accusations 'antisemitism, Islamophobia, anti-Black racism, homophobia, and transphobia'.

Labour prime minister Jacinda Ardern was much milder and her sternest word was “disgraceful” and this was only employed after agitators among the occupiers had in short order dealt police hospital-grade injuries, caused a motor vehicle to be driven threateningly into law enforcement, and cast offensive matter.

This series of events was reported by Al Jazeera, an important globalist trends indicator, and this severely damaged Miss Ardern’s ambition of presenting New Zealand as the ultimate global model for social justice.

Worse still there were intimations from these same proclaimed anti vaccination agitators that the new agribusiness lobby Groundswell would be following in the footsteps of their own convoy.

Faced with having vast tracts of high productivity grazing land forested over in order to reach pre-determined carbon dioxide targets Groundswell has taken careful note of the way in which the convey camp around Parliament has focussed the minds of politicians and public.

Typically Groundswell has taken over from the more genteel Federated Farmers which is still content to discuss with Miss Ardern’s government the various fractions of a decimal involved in the nation’s supposed contribution to world emissions.

Ottawa police chief Peter Slole resigned after criticism that he had failed to act decisively against the convoy crowd.

His counterparts in Wellington have been similarly criticised. Yet they know as does everyone else in any position of constituted authority at all that whatever happens or does not happen there can be no martyrs.

This concept was perfected by the police during the anti apartheid Springbok riots and it holds true today. Bones cannot be broken.

More in this category: « Trudeau and Ardern Perfection Collides with Convoy Reality Green Militancy Fuelled Invasion of Ukraine »
back to top
Oct 08, 2018