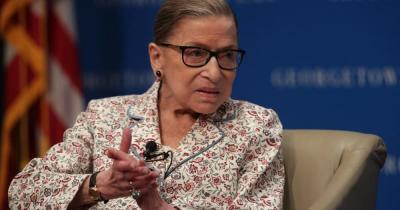 From the outset of this millennium the coastal enclaves of the United States exported ethics to the rest of the Anglosphere.

These buzzed up moral constructs were absorbed unquestioningly like warm honey until even just a few days ago. The repeal of Roe versus Wade amounted to a slap in the face.

The United States ethics command of the Anglosphere became obvious when government heads in the UK and Australasia felt compelled to remind their own citizens that they were not in fact under United States jurisdiction, and thus they were unaffected by Roe versus Wade

It was the coupling of climate and identity that supercharged the United States coastal progressive agenda export and made it unchallengeable by a compliant politico media class in Australasia and much of continental Europe too.

In fact the repeal of Roe versus Wade had silently returned to the Supreme Court agenda following the retirement in 2020 of Justice Ruth Bader Ginsburg.

It has been claimed that Justice Ginsburg (pictured) also questioned the constitutionality of Roe versus Wade on the grounds that there was nothing in the United States Constitution that dealt with abortion and that the matter therefore belonged under the aegis of the individual states.

However those who met Justice Ginsburg on her tour of New Zealand were left in no doubt about the liberal nature of her views on this and allied issues.

Justice Ginsburg during this tour New Zealand impressed audiences with her brisk and matter-of-fact descriptions of the workings of the Supreme Court.

Her visit to New Zealand achieved global attention when she announced subsequently that if Donald Trump was elected to the presidency then she would relocate to the famously social justice conscious nation in the South Pacific.

In the event Justice Ginsburg is said to be a cause of the Roe versus Wade repeal because of her determinedly clinging to her office until her death in the year she retired, 2020.

This allowed the by now elected and in-office president Donald Trump to weigh the Supreme Court against the libertarians.

Many are surprised that the Roe versus Wade repeal was made prior to the United States mid term elections later this year.

Premature leaks of the repeal’s imminence are probably one cause. Another is that the Republicans precipitated the repeal in the belief that it would consolidate their own vote.

Meanwhile one of the reasons that political leaders in Australasia so swiftly reassured their own citizens that Roe versus Wade would not spill over into these countries is the extreme sensitivity in these Oceania nations to anything involving Roman Catholicism.

Both countries from their pioneering inception sought to reduce sectarian tensions and this was notably successful in education.

Prior to the climate-identity blending the issue of abortion was the dominant moral issue of its era and its intensity was only fanned by the rawness of the division about it within Catholicism itself.

The Roe versus Wade reappraisal has re-ignited in the region a conscience-gender issue that many believed had become subsumed and even utterly buried simply because the dominant dual climate-identity packaged activism sucked the oxygen out of any competing moral issue.

In the Westminster zone of the Anglosphere this newly revived issue in all its rawness is likely to be handled gingerly by public broadcasters especially. This sector is anxious to preserve undiluted and unchallenged its flagship and priority United States doctrinal import which is the climate -identitarian coupled theory.

The tacitly accepted United States formula ethics export dominance has suddenly U-turned and ploughed into the back of a movement that more than any other had evoked traditional and confusing values often religious ones.

More in this category: « Aviatrix Hanna Reitsch WW2 Verdict is Lesson Now Boris and Scomo Fell Into Tender Trap »
back to top
Apr 30, 2018