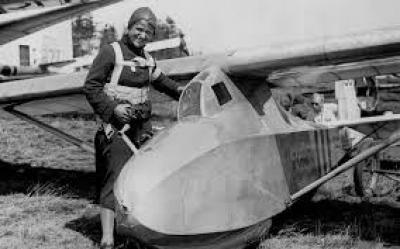 Hanna Reitsch was the first woman to fly a helicopter and also a jet plane. She was an early glider pilot and refined air brake technology. It was as a gliding instructor that she toured Australasia where in an interview she was asked what Germans most regretted about World War 2.

“Losing it,” replied the winner of two Iron Crosses.

How did West Germany recover so rapidly from World War 2, and then absorb so easily the old Soviet East Germany?

The aviatrix had supplied the answer. It was the next fixture that counted. Not the engagement that had just been lost.

Anyone crossing over from the still devastated UK in the early 1960s saw how swathes of Britain’s industrial cities were still laid waste while West Germany’s had somehow been utterly restored without any indications of the so-recent conflict.

The German single minded determination to win the peace was conducted without any diverting distractions especially those of an ideological nature.

So when the green movement took over from a highly visible yet hardly threatening bunch of post war anarchic collectives it was received with relief as a middle class and manageable safety valve.

Nobody imagined that the green movement would become the applied ideology that would involve Germany for the third time as the detonator for a European war.

Or that the fuse would be most deeply disguised by the 16 years of Chancellor Angela Merkel’s regime when Germany on the face of it had achieved the broad uplands of peace and prosperity as the stabilizer of Europe.

The requirement to manage and contain the green movement would amount to Germany each year entrusting more and more and then most of its power requirements to Russia.

This particular lesson in the peril of appeasement is being ignored with everyone in authority pretending it never happened in the first place.

Unabashed international and national government agencies criss-cross airspace seeking to reappropriate Covid funds. Treasuries are told that they must divert gigantic resources to finance poorer countries whose problems are in fact due to political instability.

As Russia bombards Ukraine in order to land lock it the global debate conducted by the intergovernmental agencies whose job it was to stop the conflict in the first place still centres on a modelled crisis instead of the actual one. Any diversion is welcome. Think Glasgow.

The 1972 Nixon-Kissinger entente with China was designed to introduce a split in world communism. Yet nobody sounded the alarm that there was pending a re-grouping for the February 24 Ukraine invasion.

Hanna Reitsch in two words bluntly summarised a state of affairs that most are still too tremulous to articulate. Most people who had anything to do with Germany in the decades immediately after the war know her verdict to be correct.

Compare this with the situation now in which governments, media outlets, and intergovernmental organisations dance around issues of any importance at all if there is any danger of giving offence to any ordained ideology, especially one from which they profit.

Where are the West’s intelligence agencies in all this? Nowadays theirs is anything but an oath of silence as they must jockey around with the rest of the bunch for their funding.

They restrict themselves to dazzling insights into the blindingly obvious.

There is a lesson here and it is one that the ruling/ political class cannot bring itself to confront.

It is that ideologies can overwhelm the very organisations supposed to manage them and they do so by infiltrating the body politic as a cause more noble than the obvious ones such as national defence.

The fact that Nato handed over its main strategic asset, its fuel supply, to the enemy that it was configured to fight, to contain, reminds us how ideology cancels logic.

Ideological pronouncements now dominate. These catch-phrase and slickly-branded theories replace what were until quite recently known as statements.

Hanna Reitsch who flew the last plane out of Berlin was witness to and participant in what is considered the most lethal of these theories.

The aviator’s summary in its plain spoken two-word delivery distils a simple fact.

Which is why it still stands out amid the ethereal, obscure yet high-sounding slogans which today masquerade as descriptions of what has gone on, is going on, and what will go on.

More in this category: « Australasia Separatism is China Hegemony Open Door Ruth Ginsburg Would Have Stalled Roe Repeal New Zealand Visit Indicated »
back to top
May 10, 2018