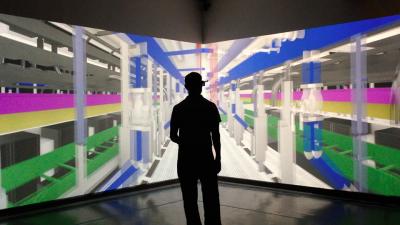 Immersive reality technology has exploded throughout 2016, with more creative uses invented every day. Many huge corporations are placing massive investments in its development. According to ABI Research predictions, immersive reality will balloon into a $100-billion-dollar industry by 2020.

The exciting technology can be broken down into three distinct categories: Mixed Reality (MR), Augmented Reality (AR), and Virtual Reality (VR). The Microsoft’s HoloLens is a great, recent example of mixed reality, which is a split combination of reality and the virtual world. Augmented reality uses “markers” to add pieces of virtual information within the known world. And then there’s virtual reality which fully immerses users into an alternate world.

Whether you’re creating safer training scenarios, developing project blueprints, working out technical issues or showing off a completed project, immersive technologies will take construction to a new level of efficiency and effectiveness. Though immersive devices are still very early in commercial development stages, experts and industry leaders are grasping on. Because when you can change the way you see the world, you can change the world you see.

Perhaps one of the most exciting, user-friendly pieces talked about this year has just been released. Microsoft has been working all year to produce the HoloLens headset, which noticeably resembles a StarTrek device. This wireless headset hit the market just in time for 2016 Christmas gifts. Though with a $3,000 price tag, only a privileged few will find one wrapped beneath the tree.

The headset resembles two rings of a 3D solar system, which unfold in concentric circles. The first, inner circle rests around your head and uses a bicycle-helmet-style ratcheting dial to tighten it securely. The front sticks to your forehead, and the back rests below the backside of your skull.

Users interact with their environment by making specific changes with their index finger. Journalists with early-release experiences noted some user inconvenience due to the precise index finger movement and overall headset discomfort. But at the end of the day, it lets you add the virtual world to your current reality, completely transforming the world you see. Comfortable or not, that’s pretty amazing.

Using “markers” AR glasses allow users to note ultra-specific adjustments in real time and space. Participants add pieces of virtual information to the known environment. Google glass has already begun providing AR glasses for military uses. But the goal is to branch out into enterprise customers within the year.

DAQRI, a California-based company, has a mission to create the most powerful AR platform humanly possible. They made a huge push forward with their smart helmet, which has great construction project application. It can accurately be described as a visionary tool for the 21st century worker.

Using AR glasses, field workers can find enhanced solutions. Entire repair manuals can be displayed before their eyes during technical difficulties. DAQRI’s smart helmet greatly improve efficiency with an enhanced degree of situational awareness. The glasses could easily be used in construction helmets, opening up the next level of project possibilities.

Completely surrounding and all-encompassing environments are possible with VR. Single-users can don a device which allows them to move within a virtual scene. Using kinesthesia and proprioception, the device can track the direction of motion distinct from the direction of eye gaze. While the range of view will vary according the device, participants will be able to turn around, look up and down and see a complete environment, known as virtual reality.

This startup is just one example of the many ways VR can transcend the construction industry. Using VR can help construction workers discover new ways to envision projects. They can allow potential buyers and investors to explore first-hand the new environment without needing to be present in the exact location.

The Cave Automated Virtual Environment (CAVE) is another great virtual reality technique with direct application for construction. Firms such as the Boston-based Suffolk Construction have begun using this technique for immersive experiences through mid-construction project sites. This ability has greatly cut down on time and costs due to a reduced number of changes requested mid-project.

If you grew up watching futuristic series such as the Star Wars or Star Trek phenomenon, then the emerging immersive technology will seem familiar. We are entering a whole new phase of possibilities with our technological advances.

At this point, it’s more about the price range and its wide-spread availability. Companies such as Facebook, Google and Microsoft are constantly exploring new ways to fully utilize immersive reality. Emerging headsets, interactive hand controllers and movement sensors will revolutionize the entire construction process.

Developing construction firms should take note. Not only could safety be significantly improved through enhanced off-site training scenarios, but also the production and display of commercial projects can significantly improve. Designers, contractors and architects will be able to make better decisions, earlier on. While there’s a high ticket price, VR, AR, and MR are here to stay.

| An MSCNewsWire Guest Post by Alison Crady from This email address is being protected from spambots. You need JavaScript enabled to view it. |  Friday 23 December 2016  |

Published in IMMERSIVE REALITY
Tagged under