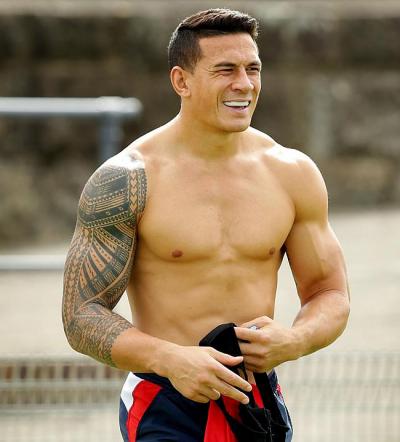 Rugbyman Sonny Williams made it clear that he was no longer going to prance around pitches attired in kit promoting usury.

Rugby officials instantly kicked for touch. They heaped upon themselves sackcloth and ashes.

It might have been viewed though as another publicity opportunity.

BNZ parent National Australia Bank is a major force in opening up Australasia to Islamic investors from the Gulf and Southeast Asia that seek to adhere to religious principles such as bans on interest and gambling.

If the BNZ had applied islamic banking principles in taking a share of ownership in the assets in which it had invested its clients’ money, it might still be owned in New Zealand.

Instead it charged interest on its loans. This was reinforced by seeking to impose penalties when the borrowers failed to pay their interest.

Interest and penalties are both taboo under islamic financing.

Islamic banking turns on joint risk-sharing as opposed to risk-transfer, which islamics describe as usury.

Islamic mortgages centre on the bank taking the responsibility of purchasing a property and then re-selling it to the buyer. This arrangement enables the buyer to repay the bank in installments in which process the bank receives also its profit.

This arrangement is designed to ensure that the bank takes its share of the risk, in this case owning the building, and recovering its profit, the installment payments, while shouldering its continued share of the risk.

The point being that at no stage is interest (usury) levied.

Nobody gets paid for renting out money. Islamic banking embraces risk-sharing as opposed to risk-transfer.

Islamic banking principles though continue to underpin Occidental merchant banking in which the bank takes on the risk of a venture by taking on ownership.

Money as money must not be used to make more money.

So why did islamic financing become sidelined by the Western model which centres on the diametric opposite practice of using money to make money via the charging of interest?

The problem was that the degree of concensus required to arrive at a common valuation of the asset to be financed and thus the proportion of risk involved began to become increasingly cumbersome in the face of the standardised model developed in the Occident.

In Europe charging a cut and dried level of interest regardless of the success of the asset or otherwise became so much easier to implement.

Curiously, the other two Abrahamist/book religions, Judaism and Christianity, have at one stage or another shaken from their shoes the dust of usury and tested instead the risk-balancing islamic system..

But the standardisation of administration and thus the efficiency inherent in the Western technique in the end compensated for its own drawback in which the advantages are seen to be weighted in favour of the lender, the bank.

It is said that Williams was converted in the French port of Toulon nearly 10 years ago while he was a local team member.

Toulon’s cathedral was once a mosque.

Pressure will now be being brought onto the athlete to lead by example.

The issue has so far been viewed exclusively in moral and/or sports gear outfitting terms.

It should also be seen, as perhaps Williams intends, as the start of a wider evaluation of islamic finance.

One such source of interest might be from those who have enlisted in class actions against banks over the bank infliction on them of penalties.

Islamic finance principals hold that penalties may not be levied.

Instead failures to perform to the original agreement require that donations be made to charities – and not to the bank.