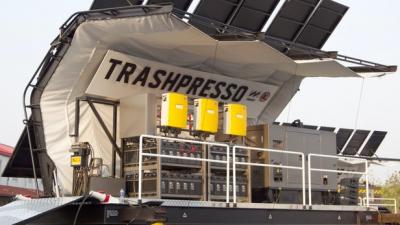 In developed countries, it's easy for most people to not give garbage disposal much thought: it's hauled to the curb, and a truck carries it away out of sight and out of mind. But isolated communities often lack that infrastructure, meaning it's harder to either truck out the trash or process it on-site. The Trashpresso is designed to lighten the load a little, as a semi-portable, solar-powered plant that turns trash into tiles.

The system was created by Miniwiz, the design company behind other creative recycling initiatives like Polli-Bricks, made from discarded plastic, and Nike's concept store in Shanghai, China, which is built entirely out of materials derived from bottles, cans and DVDs.

This latest venture is what Miniwiz calls a "mobile up-cycling plant." The Trashpresso fits inside a 40-ft (12-m) container that can be trucked around to remote locations that need some cleaning up. Once unpacked on-site, the system can wash, shred, melt and mold plastic and fabric waste into tiles, which Miniwiz says are suitable for indoor and outdoor flooring, or further refinement. The equivalent of five plastic bottles goes into each tile, and the Trashpresso can produce about 108 sq ft (10 m2) of them every 40 minutes.

To be deployed far from the grid, the Trashpresso needs to be self-sufficient, and to that end the system runs entirely on solar power. Even the water that it uses to wash the garbage is recycled back through the system, in an effort to reduce its footprint.

"Until now, industrial grade recycling was limited to plants," says Arthur Huang, co-founder and CEO of Miniwiz. "The Trashpresso overcomes the distance and energy barriers by showing that recycling is possible everywhere. Not only does it serve to transform trash on-site, it also serves as an educational tool in isolated communities."

The Trashpresso's first gig will be to clean up the glacier region of NianBao Yuze, which sits on the Tibetan Plateau and feeds into the Yellow, Yangtze and Mekong rivers. Miniwiz says that the area is seeing increased tourism and, as a result, increased litter. The company will deploy the system in July to show off its capabilities.

More in this category: « Revolutionary flow control ensures a gentle touch in Piab's conveyor for fragile goods. “Engineered to last” splicing technology from Fujikura Europe »
back to top
Mar 06, 2018