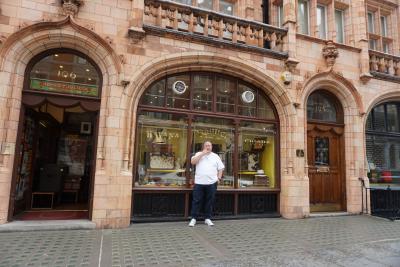 From MSCNewsWire's European Corespondent: Laurence Davis is a by-word in London for fine living and his dealings with Cuba have bestowed on him an aura in the UK redolent of that conjured up by fellow Briton the novelist Graham Greene. The façade of Sautter of Mount Street remains among London’s most famous hallmark store-fronts. For cigar afficionados the Mayfair store is the ultimate destination of any vintage pilgrimage. MSC Newswire entered this high temple of connoisseurship and posed Five Questions to Mr Davis who is pictured outside his store. .

You were among the first to import regularly from Cuba?

We have been dealing with Cuba on and off for 60 years, importing directly certain things but mainly through an importer. We import cigars and rum.

How effective do you believe now were the various US embargoes against the Castro regime?

The US inspired embargo led to a big grey market trade and the quality buyers from the USA have been coming to my stores for years.

As an eyewitness how do you rate the changes since the death of Fidel Castro?

Since the death of Fidel the promise of closer relationships with Cuba has already cooled with President Trump. The effects though are that there is a huge influx of Middle America visiting Cuba. I have to say that though that the quality for visitors of the cigars brought through the shops out there is inferior to the English market selection.

Cuba is still an exotic port of call for tourists?

Cuba is a fantastic tourist destination with many facets of culture communism and some of the most beautiful architecture anyone can hope to see anywhere and which the population enjoys as part of its daily life rather than as set aside monuments and other such museum-pieces of the past. I suggest that Cuba is visited now before globalisation destroys it in the form of the introduction of Starbucks, McDonalds and the numerous American hotel chains.

Do you envisage Cuba as a worthwhile target for intensive New Zealand trade promotion, development?

In practical terms, I think it is very difficult for smaller economies like Cuba to develop anything beyond niche product trade with any nation so far removed from its trade routes.

More in this category: « UK Anti Insurgency Authorities Know that Mass Repatriation of Families of Perpetrators is Only Solution to Terrorism Advisers Managing Theresa May’s Contrary and Issue-Dodging Campaign will be Hung Out to Dry »
back to top
Nov 11, 2018