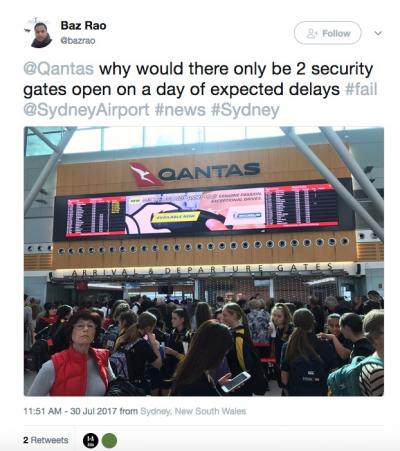 Passengers travelling out of   major Australian airports should plan their airport arrival to be earlier than usual from today, to allow for increased security screening after police and counter-terrorism agencies foiled a plot at the weekend to “bring down” a plane, reportedly an Australian domestic flight.

Counter-terrorism squads, which launched armed raids on four Sydney properties on Saturday evening over an alleged “Islamic-inspired” plot to blow up an aircraft, arrested four men. Authorities first learned of the alleged plot on Wednesday and stepped up security at Sydney Airport on Thursday.

Prime Minister Malcolm Turnbull told reporters yesterday (Sunday) that security-screening measures had been beefed up at all Australian airports – and passengers should arrive early.

“Travellers should arrive at terminals at least two hours before flights to allow ample time for screening.

“They should limit the amount of carry-on and checked baggage, as this will help to ensure that security screening is efficient.”

That’s from the Prime Minister.

Passengers faced significant delays at major airports yesterday and used social media (as above, on Twitter) to let people know that queues were building up at airports around the country.

Qantas placed the following notice on its website yesterday:

Customers can expect to experience an increased level of security scrutiny at the airport so it may take a little longer than usual to get through the process:

There are no changes to what can and cannot be carried on-board the aircraft.

Thank you for your understanding and patience.

Virgin Australia and its budget subsidiary Tigerair Australia advised passengers similarly, adding that customers “should not be concerned about these precautionary measures”.

“As the measures place an additional burden on the screening system, it may take a little longer than usual to get through the process,” Virgin Australia said.

At Adelaide and Sydney airports, some passengers reported delays yesterday of up to 90 minutes before passing through security, with a major police presence at and around the airports.

Turnbull said the plot appeared to have been carefully planned and was probably not the work of a lone wolf but in the category of “quite elaborate conspiracies”.

He said none of the men arrested worked in the airport industry but police believed the plot aimed at the Australian aviation industry at a major airport.

Five properties in Surry Hills, Punchbowl, Wiley Park and Lakemba were raided on Saturday evening. Surry Hills, a diverse and – in parts – very fashionable inner-city suburb, was a surprise. The other suburbs, in south-western Sydney, have significant Muslim populations, giving rise to early suspicions that Saturday’s simultaneous raids were linked to Islamist extremism. This seems to have been confirmed.

“We believe it’s Islamic-inspired terrorism,” Australian federal police commissioner, Andrew Colvin, said. “Exactly what is behind this is something we need to investigate fully.”

ABC News said it had learned that police found materials and items “that could be used to make a homemade bomb” when they raided the house at Surry Hills.

The broadcaster said it understood that authorities believed the group planned to smuggle the device onto a plane and blow it up.

The elephant yet to leave the room