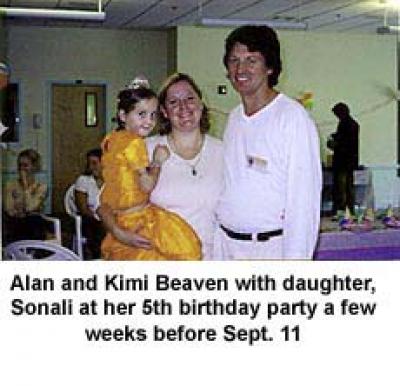 United States Vice President Mike Pence’s tribute to the passengers who overpowered the crazed psychopaths who sought to commandeer on September 11 2001 United Airlines Flight 93 included reference to a New Zealander who is now all but forgotten in his native land.

Alan Anthony Beaven is increasingly being seen as one of the key passengers on the flight who physically suppressed the gang to the point at which the flight from Newark to San Francisco crashed into a field at Shanksville, Pennsylvania, instead of into its target which is now considered to have been the Capitol, Washington

Mr Beaven, 48, had been seated toward the back of the plane. His distinctive New Zealand accent is clearly audible on cockpit recordings.

Evidence of his remains and personal belongings were found in the cockpit.

A burly fellow, Mr Beaven, is even regarded as a symbol of the determination, especially in regions such as Pennsylvania, of the single-minded determination in the United States to rid itself of lethal fanaticism.

Paradoxically Mr Beaven’s own career as a crusading attorney had devolved into campaigning for exactly the same category of liberal causes that are often associated with apologists for the current Salafist kamikaze plague.

Mr Beaven appears to have hailed from Devonport, Auckland. Along the way he acquired a law degree. It is now that his career becomes uncertain. He left New Zealand at any early stage and found a berth at one of the more venerable English universities. Here he seems to have pursued graduate studies and also to have served in a tutorial capacity.

From there he seems to have shifted to private practice and in this capacity appears to have served as a public prosecutor notably on behalf of Scotland Yard.

He contracted his first marriage, one enriched by his sons.

His move to California now provided this “citizen soldier” as Vice President Mike Pence described him with what gives all the signs of being his true vocation, that of a skilled and audacious public interest environmental protection lawyer.

It was of the homily variety so familiar to anyone who does business in the United States.

But in the instance of Mr Beaven it proclaimed, Fear? Who Cares?

The mystery, and thus the curiosity surrounding Mr Beaven has only intensified with the New Zealander becoming the focus of one of the conspiracy plots clinging to 9/11 and those associated with it in any practical way, as Mr Beaven fatefully was.

The theory floats around the notion that Mr Beaven was deliberately programmed to have been on the flight.

This notion hinges on a seemingly last minute decision to take the flight to sort out a client tactical legal problem, prior to taking an extended tour of Asia with his second wife and their daughter (pictured with Mr Beaven.)

And so it goes on.

Meanwhile, Vice President Pence who spoke of his boss, President Donald Trump’s insistence on the enduring recognition of the valour of the passengers on the flight, spoke of the Tower of Voices memorial planned for the Flight 93 crash site.

The memorial is scheduled to include 40 chimes that each sound its own note, intended to symbolize the memories of the “bravehearts” as those who fought the thugs to a standstill were described.

The acclaim and regard and from so many quarters in the United States gathering around the memory of Mr Beaven indicates an opportunity for a response in the land of his birth.

Indeed Mr Beaven can be viewed in New Zealand as a symbol of how contrived mediatique “heroes” such as those in sports or the finance sector or simply self-proclaimed ones, have utterly overwhelmed the much rarer spontaneous variety who instinctively and without thought of reward put their own neck on the line.

|  From the This email address is being protected from spambots. You need JavaScript enabled to view it. reporters' desk  || Friday 15 September 2017   |||

More in this category: « A Tribalising United States follows Re-Tribalisation of Great Britain and its Commonwealth Doors of Ministry of Foreign Affairs & Trade Open for New Zealand First Party's Balance of Power Holder Winston Peters MP »
back to top
Nov 11, 2018