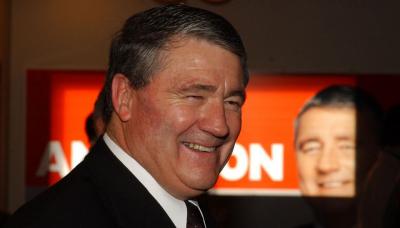 This signal contribution to the nation’s economic life was ignored in a nostalgic outpouring for the fading era of working class politics not witnessed since the death in office of Labour prime minister Norman Kirk.

Mr Anderton remains the only ranking politician of any party to have seen that trade apprenticeships were becoming obliterated by the ruthlessly hypnotic effect that the universities and their lobby were having on successive governments to persuade them to place all post-secondary instruction and of any type in varsity hands.

Mr Anderton’s Modern Apprenticeships scheme was a bold move at the cusp of the millennium and had much to do with Mr Anderton’s having experienced life in a number of callings including manufacturing at a time when the Labour Party was well into the throes of being dominated by the professional political class.

Mr Anderton, a politician with no reverse gear, stuck to his apprenticeship-nurturing scheme, faced down the university lobby, and in doing so laid down the real-work foundation that enabled the nation to ride the dairy boom and then cope with the Christchurch earthquake, plus get to grips with the accelerating demand-over-supply of residential accommodation.

James Patrick Anderton at various times involved with the mainstream Labour Party and his own Alliance, New Labour, and Progressive parties began his public life as an organiser for the Catholic Youth Movement and then becoming secretary of the Auckland Catholic Diocese.

He was a teacher, and a social worker. It was though his stint in the marketing department of UEB and then running a family electrical manufacturing business that gave him his first insights into the value, and the requirements of the productive economy.

Turning his face doctrinally against Rogernomics or neo-liberalism or globalisation as the free market regime would later be described, he parted company with the Labour Party’s deliberate policy U-turn.

But his subsequent role as the keeper of the flame of its traditional attitudes saw him holding down numerous cabinet positions when Labour returned to power, notably the one as Minister of Development.

Though tribune of working class values, Jim Anderton was not in the mould of an Irish pol meeter-and-greeter. His publicly-nurtured guitar –strumming relaxed image was at stark variance with the reality.

He gave the impression of being uneasy at gatherings, and other glad-handing occasions yet slickly compensated for this by cultivating the persona of an all-business technocrat.

On the platform though, brow-lowered, countenance glowering, he reminded people of another similarly high profile and equally enduring multi party political figure and deputy prime minister, the equally simmering Winston Peters MP who Mr Anderton once claimed was unable to distinguish between “immigrants and refugees.”

Upon his death his former colleagues and commentators focussed exclusively on Mr Anderton’s work in establishing the New Zealand-owned savings and loan Kiwibank,

Ignored was his single-minded drive to go against the grain of the fashionable wisdom of the time and restore the emphasis on trade apprenticeships.

Mr Anderton who was born in 1938 died after a long illness, a heart affliction.

His death was accompanied by the now seemingly-mandated encomia words such as “towering, ” “integrity” “compassion” and “principled.”

In the event he simply did what politicians are supposed to do, yet rarely attempt, let alone accomplish, which is to anticipate a danger and then do something about it, in his case the applied skills shortage one.

| From the This email address is being protected from spambots. You need JavaScript enabled to view it.  || Friday 19 January 2018   |||

More in this category: « Saudi Monarchy Detention of Tycoons is To Recover $100 Billion----Australasian Implications Deliberately Ignored Why Prince Al Waleed’s Pals Keep Their Heads Down »
back to top
Nov 11, 2018