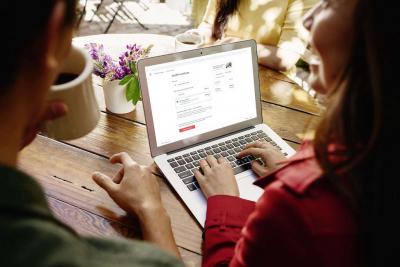 Jan 21, 2018  -  As the professionalization of homesharing progresses, adding a payments feature such as this makes a lot of sense writes Deanna Ting on Skift.  First came split payments for groups. Now it’s flexible payments.

Today, Airbnb announced a new and more flexible payments policy called Pay Less Up Front. Now, when people book an accommodation on the Airbnb platform that costs $250 or more, they have the option of first paying a deposit — generally 50 percent — and then paying the remainder closer to their check-in date.

To qualify, bookings must also be made at least 14 days prior to the check-in-date. If a guest can’t fulfill the second payment, his or her booking will be automatically cancelled.

Before this new feature, users had to pay 100 percent of the cost of their Airbnb accommodation up front.

Flexible payments in the homesharing and vacation rental space, however, aren’t anything particularly new. For instance, sister companies HomeAway and VRBO, both Expedia-owned, offer this type of flexible payment option. But by adding this feature, in addition to offering split group payments, Airbnb is making its platform particularly appealing to cash-flow sensitive travelers.

Airbnb said it decided to add this feature primarily because it not only benefits guests but hosts, as well. In its testing of flexible payments, the company found that 40 percent of its guests, if given the option, would choose to pay less up front and pay the remainder later, and when they did, they would generally opt for higher-value accommodations.

In other words, with Pay Less Up Front, guests would spend more on their Airbnb stays, generating more revenue for hosts, and for Airbnb, too. For every booking made on its platform, Airbnb collects a three to five percent fee from hosts and a five to 15 percent fee from guests.

Airbnb also said that it found that with this payment feature, customers made bookings with nearly double the lead time, meaning hosts were able to confirm and manage their bookings more easily. This feature also helps guests who may have been previously wary of booking a particular listing further in advance because of having to pay 100 percent up front.

Cancellation policies, of which Airbnb has three standardized versions, will not be impacted if a guest pays with the deposit, the company said. So, if a guest who uses Pay Less Up Front cancels his or her booking, that should not have an impact on how much the host collects. Airbnb said that its hosts don’t receive payment until approximately 24 hours after a guest checks in; the company collects both the deposit and the final payment prior to check-in. The company also said it will honor the payouts specified in the cancellation policies that a host has instituted.

What happens if a guest fails to make his or her second payment will also depend on the cancellation policy that a host has chosen. An Airbnb spokesperson told Skift that, generally, if the second payment falls through, Airbnb will follow up with the guest to request another form of payment and the guest will have approximately 72 hours to resubmit another form of payment to keep the booking. It’s not clear, however, if there are additional ramifications for a guest who misses his or her final payment.

Andrew McConnell, CEO of Rented.com, which helps homeowners find rental managers for their vacation homes, said this new feature seems like an all-around win not only for Airbnb hosts and guests but for Airbnb, too.

That’s, of course, if this payments policy change indeed leads to the increase in bookings that Airbnb envisions.

McConnell said this symbolizes the “maturation of Airbnb as well as of the industry” as some differences between hotels and homesharing get diminished.

“[Airbnb] really becomes more and more of a good substitute for hotels,” he said. “When you book a hotel, unless you do prepaid non-refundable rates, you don’t’ have to put anything down and it makes it much easier to book a room. When people feel more comfortable booking, they book more frequently. That’s more revenue for booking channels, and more money for hosts because they get more people coming in. For guests, it gives them that piece of mind. It also opens up travel more for people who may not be sitting on a lump sum today but need to plan vacations more ahead of time.”

While many hotels require guests to pay for the cost of their accommodations when they arrive at the hotel, more and more hotel brands are also, interestingly, adopting tougher cancellation policies.An Airbnb Host’s Perspective

While industry experts like McConnell see this flexible payment option as a win-win situation for both Airbnb guests and hosts, one host said she’s not entirely convinced. Melanie Meharchand, an Airbnb host based in Monterey, California, who lists two properties on Airbnb, said that while she understands how this can be beneficial for hosts, there may also be “some downsides,” too.

She expressed concerns over how flexible payments might impact cancellation policies, adding that it might lead to some confusion for hosts.

“The availability settings in the system even for a host are so complicated right now that sometimes it’s very hard for hosts to figure out how much they get paid once something is paid,” Meharchand said. “You don’t know exactly at the end of the day how much you will get paid.”

However, Airbnb disagreed with this notion. “This doesn’t impact the way — how, when, or how much — a host gets paid at all,” an Airbnb spokesperson said. “Hosts won’t notice a difference, except perhaps they are getting longer stays and bookings secured further out, which hosts like.”

“It could mean that payments paid partially in advance or two weeks before or in combination with a cancellation policy could mean that hosts could not have any payment at all,” Meharchand said. “[Hosts] may be making time for a guest who may not ultimately end up making a booking. There’s very little compensation for hosts with Airbnb’s move toward a penalty-free cancellation policy.”

Meharchand also wondered about the flexible payments introduction given current hotel industry trends.”It’s interesting that Airbnb is doing this when you see other hotel companies moving toward stricter cancellation policies,” she said.

The ability of hosts to screen potential guests has been diminished, Meharchand said. There are two sides to that proposition though: While that can be a good thing because it reduces the likelihood of discrimination, it can also be a bad thing for hosts who want to know more about who is staying in their homes.

“If Airbnb thinks this feature will help people pay for properties they might not otherwise have been able to afford because they are paying in two installments, that puts a red flag in my mind,” she said. “We might be getting groups who might not be able to afford a property and might be less careful about a property. Part of the credit card system and having to pay everything in advance just meant you got a higher quality of guest overall. Airbnb could be opening itself up to slightly more risk with lower-quality guests being able to book. The screening mechanisms for hosts are being taken away.”

Flexible payments, Meharchand believes, is one of many steps the company is taking to make it easier for people to book a stay on Airbnb, and one of those includes the company’s push toward expanding Instant Booking on its platform. Of its more than 4 million listings worldwide, more than 1.9 million are instantly bookable, including Meharchand’s two listings.

“I did opt into Instant Book for both of our listings,” Meharchand said, “because the penalty for not being in Instant Book is that you are far less likely to get booked on.”

Said Meharchand: “Making homes more accessible by easier payments schemes is great, and it’s part of a whole scheme to make homes more accessible, but it can also be worrisome for some hosts because it reduces hosts’ ability to screen guests for people who would be appropriate for our homes.”