Emirates to Open New Route between Auckland and Dubai, via Bali 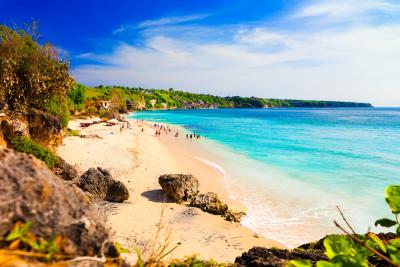 Feb 19, 2018  -  Emirates today announced its plan to launch a new daily service from Auckland to Dubai via the tropical island of Bali, Indonesia, starting from 14 June 2018.

The new service will offer New Zealand travellers a total of three daily flights to Dubai and beyond, complementing Emirates’ existing non-stop daily service between Auckland and Dubai and its current daily A380 service between Christchurch and Dubai via Sydney. Travellers will also enjoy a choice of three daily services between Bali to Dubai in the northern summer*, as the new flight adds to Emirates’ two existing daily services which are currently operated by a Boeing 777 300-ER in a two-class configuration.Emirates’ new Auckland-Bali-Dubai flight will provide the only year-round non-stop daily service between Auckland and Bali, giving passengers an opportunity to visit and/or stop over in one of the most popular islands in Indonesia. The airline will operate a Boeing 777-300ER on the route, offering eight seats in First Class, 42 seats in Business and 304 seats in Economy Class, as well as 20 tonnes of belly-hold cargo capacity.Sir Tim Clark, President Emirates Airline, said: “We’re pleased to introduce additional capacity to serve the strong demand for travel to Bali, and to and from Auckland. We are confident that our year-round service between Auckland and Bali will be well received by our customers, not only in New Zealand and Indonesia, but also from our global network, particularly from markets like the UK, Europe and the Middle East.“This new Emirates service, together with the trans-Tasman network changes that we had previously announced in tandem with our renewed Qantas partnership, ultimately offers a new destination and more choice for New Zealand travellers whether they are headed to Australia or beyond,” he added. “This underscores Emirates’ commitment to New Zealand, dating back nearly 15 years, and our confidence in its growing tourism market.”With its spectacular mountains and picturesque beaches, Bali is considered to be a world leading tourist destination, welcoming more than 4.5 million foreign tourist arrivals in 2016, including over 40,500 New Zealanders. Emirates’ new service will add to Bali’s global connectivity, further stimulating the island’s economic and tourism growth.

Apart from the opportunity for a stopover in Bali, the new service will provide excellent connections to/from London and other major European cities. The southbound flight, EK 450, will depart Dubai at 06:55, arriving at Denpasar (Bali) at 20:20 local time, before flying on to Auckland at 22:00, arriving in New Zealand’s biggest city at 10:00, the following day Northbound, the new service will depart Auckland as flight EK 451 at the convenient time of 12:40, arriving in Denpasar at 17:55 local time. It will depart Denpasar at 19:50, arriving in Dubai just after midnight at 00:45, connecting to flights to many of the points beyond on the extensive Emirates network.

Passengers in all classes can enjoy Wi-Fi to stay in touch with family and friends or Emirates’ multi-award winning ‘ice’ Digital Widescreen with up to 3,000 channels of movies, TV programmes, music and podcasts. Emirates provides its customers with a host of culinary offerings prepared by gourmet chefs and fines wines that suit the tastes of everyone. Passengers can also experience Emirates’ renowned in-flight service from the airline’s multi-national cabin crew from over 130 countries, including New Zealand and Indonesia.

Emirates Skywards members can earn up to 21,500 Miles in Economy class, 40,850 Miles in Business Class and 53,750 Miles in First Class with return flights from New Zealand on the new Auckland- Bali-Dubai- service. Members can also upgrade from Economy to Business on the Dubai to Auckland route from 63,000 Miles. See mile calculator here.

Emirates Skywards, the award-winning loyalty programme of Emirates, offers four tiers of membership - Blue, Silver, Gold and Platinum - with each membership tier providing exclusive privileges. Emirates Skywards members earn Skywards Miles when they fly on Emirates or partner airlines, or when they use the program’s designated hotels, car rentals, financial, leisure and lifestyle partners. Skywards Miles can be redeemed for an extensive range of rewards, including tickets on Emirates and other Emirates Skywards partner airlines, flight upgrades, hotel accommodation, excursions and exclusive shopping. For more information visit: https://www.emirates.com/skywards

* Emirates will operate double daily services between Bali and Denpasar from 28 October 2018, in accordance with winter schedules.

More in this category: « Qantas cuts first class on major route Emirates Increases Capacity to Lisbon »
back to top
Mar 20, 2018