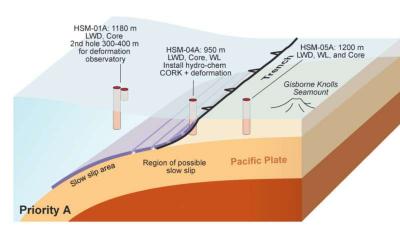 This March and April, an international team of researchers will install monitoring equipment inside an active fault zone off the coast of New Zealand, in the Ring of Fire, in the first-ever scientific drilling mission specifically designed to study slow earthquakes.

The expedition is funded through the National Science Foundation's International Ocean Discovery Program. The Penn State researchers' efforts are supported by $165,000 in grants from the U.S. Science Support Program, which facilitates U.S. researcher involvement in the IODP.

Slow earthquakes, also known as slow slip earthquakes, are not well understood partly because they are difficult to detect. In some cases, they may contain roughly the same total energy as magnitude 7 or larger earthquakes, except that instead of lasting for seconds or minutes, they last for days or weeks at a time. Because of this, they dissipate energy at a much slower rate, which has allowed them to elude detection by seismographs. Only within the last two decades have researchers begun to focus investigations on slow earthquakes, but a lack of robust data prevents us from knowing how or why they occur and how they relate to major earthquakes and the risk of tsunamis.

Saffer, Wallace and their collaborators aim to change this.

In addition to collecting samples of the rock and sediment in the slow slip source area to characterize its properties, they will install two observatories roughly 1,600 feet beneath the sea floor that will allow them to document rock strain and deformation, temperature, and the chemical makeup of the rocks, and to fingerprint any fluids released during tectonic activity.

"These data will tell us about the 'creaks and groans,' or strain accumulation of the shallow fault zone, which is important for tsunami genesis, as well as potentially the origins of fluids associated with slow earthquakes," said Saffer.

The researchers will place their observatories along the Hikurangi continental margin, located off the coast of New Zealand's North Island. Here, the Pacific tectonic plate is being pushed underneath the Australia tectonic plate, a process known as subduction. One observatory will be placed into the Australia plate above the slow slip source fault, and a second will be placed directly into the fault zone where the two plates meet and slide past one another.

This area is a hotbed of tectonic activity ranging from slow earthquakes occurring on roughly two-year cycles to major earthquakes, such as the one in 1947 that triggered a large and damaging tsunami.

There are multiple theories on whether slow earthquakes increase or decrease the risk of tsunami generation.

"One hypothesis is that slow earthquakes release strain before it can accumulate to be released in a large earthquake, and therefore decrease the risk of tsunamigenic slip; while another is that the slow slip may load up regions of the subduction fault nearby and trigger earthquakes," Saffer said. "The only way to know what's happening is to get in there and document the conditions, the stresses and temperatures and pressures associated with slow earthquake activity."

After installing their equipment, the team will return in 2020 or 2021 to collect the observatories and begin analyzing the data.

The team leaves March 11 from New Zealand and will complete their mission on May 5. For more information, visit the project website: http://joidesresolution.org/expedition/375.

Source:  Provided by Pennsylvania State University :  This Phys.org Science News Wire page contains a press release issued by an organization mentioned above and is provided  “as is” with little or no review from Phys.Org staff.

More in this category: « AI provides tech work window for women ACL Airshop and CORE Transport Technologies: Advancing Bluetooth® Tracking for Air Cargo Toward a Giant “Internet of Things” »
back to top
Mar 07, 2018