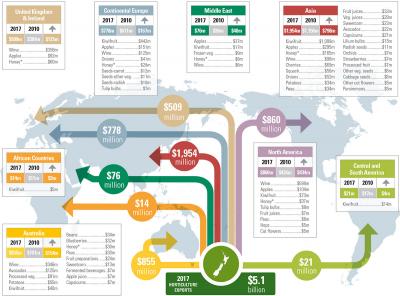 New Zealand horticulture had another record breaking year in 2017. The industry was valued at $8.8 billion, up $100 million from 2016, and the total value of exports was close to $5.12 billion, up $14 million from the year before.

According to the latest Fresh Facts, an industry annual published by Plant & Food Research, horticultural produce accounted for 10.3% of New Zealand’s merchandise export income in the year to June 2017. The growth was driven by increases in the export values of fresh and processed fruit (excluding wine), from $2.78 billion to $2.82 billion, and fresh and processed vegetables, from $0.61 billion to 0.62 billion. Kiwifruit continued to be the nation’s top horticultural export at $1.66 billion, accounting for 33% of the total export value. It was followed by wine at $1.54 billion, 30% of the total export value.

New Zealand horticultural produce was exported to 128 countries, with five markets—Australia, Continental Europe, the USA, Japan and China—taking up more than two-thirds of the total exports. Exports to Asia reached $1.95 billion, twice as much as any other continent/region.

“The success of New Zealand horticulture is built on its well-earned reputation of delivering high quality and premium products to the overseas markets,” says David Hughes, CEO, Plant & Food Research. “The horticultural industry must keep up the quality and innovate to offer new products that meet international market needs in order to secure our position. Adopting new technologies and best practices to minimise environmental and social impact of the production process will further strengthen our clean, green image in the global marketplace.”

“The continual growth of the New Zealand horticultural industry attests to the quality of our produce and the hard work of our growers,” says Mike Chapman, Chief Executive of Horticulture New Zealand. “We are confident that the industry will meet the $10 billion by 2020 target as long as we are committed to listening to local and overseas consumers and offering products they want and desire.”

To view the latest issue of Fresh Facts, as well as all previous issues, visit www.FreshFacts.co.nz or download the Fresh Facts app on Apple App Store or Google Play.

Key facts* Produce from the New Zealand horticultural sector exceeded $8.8 billion in the year to 30 June 2017.* The total value of horticultural exports was $5.12 billion in 2017, an increase of 91% ($2.7 billion) from 2007.* New Zealand’s biggest horticultural export was kiwifruit, worth $1.66 billion. Other key exports were wine ($1.54 billion), apples ($691 million), and avocado ($147.5 million).* Avocado export demonstrated significant growth from $82 million in 2016 to $147 million in 2017, likely in part to the biennial nature of avocado production. In 2015 avocado export was valued at $115 million.* Exports to five markets: Australia, Continental Europe, the USA, Japan and China accounted for almost $3.5 billion and 67.7% of the total exports.* The diversity of horticultural exports is apparent in the 22 categories exported to Asia, each between $5 million and over $1 billion, and 13 categories to Australia, each between $7 million and over $440 million (fob) value.* More than $200 million worth of honey was exported to Asia and Australia.

More in this category: « For the love of ugly fruit, a Hawke’s Bay juice company has a solution China and New Zealand to create a kiwi gene bank »
back to top
Nov 27, 2018