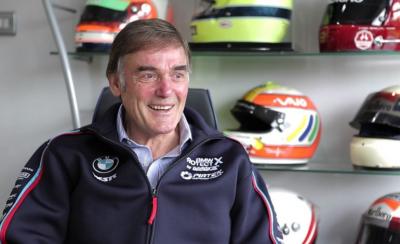 New Zealander Dick Bennetts and the UK-based race team he founded have been recognised with an award from European motorsport industry publication and expo, Professional Motorsport World.

Originally from Dunedin, Bennetts came to prominence as a championship-winning race engineer for Niki Lauda and Stefan Johansson as part of Ron Dennis’s Project 4 organisation (Dennis has his own Kiwi connection as the former CEO and Chairman of the McLaren Technology Group, which evolved from Formula 1 team created by New Zealander Bruce McLaren.)

Now aged 71, Bennetts founded West Surrey Racing in 1981 to compete in the British Formula 3 Championship, and 14 years later the team bowed out of F3 as the most successful team in the history of the series, both in terms of race victories and titles.

Over the years, Bennetts has been responsible for masterminding the careers of such names as Ayrton Senna, Mika Häkkinen, Jonathan Palmer, Rubens Barrichello, Maurício Gugelmin and Eddie Irvine with his involvement in F3 and a racing academy in the 1980s and ‘90s.

In 1996, Bennetts directed WSR’s focus to the British Touring Car Championship, originally with Ford. Now as the official BMW team, WSR has won nine overall BTCC crowns with the BMW 125i M Sport in the past five seasons.

Following WSR’s 2018 BTCC success as the reigning Drivers’, Teams’ and Manufacturers’ Champions, the team was named the European Race Series Team of the Year in the Professional Motorsport World Expo Awards at a ceremony in Cologne, Germany, attended by 300 of the global motorsport industry’s leading figures.

Bennetts was quoted as saying: “It’s a great honour for everybody at WSR to be named European Series Team of the Year by Professional Motorsport World, a publication that’s not only essential reading for me, but also influential within the technology sector of the industry. The BTCC is a championship in which it’s incredibly hard to get to the front and even more difficult to stay there. The fact that we’ve remained competitive throughout the past six seasons with the BMW 125i M Sport and won three titles this year speaks volumes about the ability and determination of every member of our team.”

Wayne Christie, President of MotorSport New Zealand, says this is fantastic recognition for one of the quiet achievers of New Zealand motorsport.

“While Dick Bennetts hasn’t lived in New Zealand for many years, he maintains strong and valued links with our motorsport community,” says Christie. “West Surrey Racing has achieved extraordinary success under Dick’s leadership and we’re thrilled on their behalf to be recognised in this way by the wider motorsport sector.”

More in this category: « Combustion or electric race car? UC Motorsport says why not both? GM is slashing more than 14K factory, white collar jobs; may close 5 factories »
back to top
Jun 01, 2018