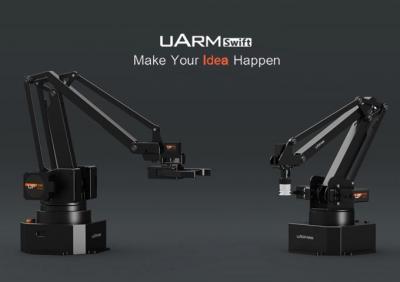 Robotic arms are moving out of large-scale factories and into homes or small businesses, and are increasingly used to help disabled people feed themselves and perform other tasks. Price is a problem though, so outside of some very specific use cases, they generally aren't worth it for interested tinkerers. But now, Ufactory has unveiled new versions of its consumer-level robot arms, the uArm Swift and Swift Pro, that are aimed at being cheap enough to splash out on, even if all you ever program it to do is stir your coffee for you.

Following the release of its first product, the uArm, back in 2014, Ufactory's next iterations – currently at the prototype stage and up for crowdfunding on Indiegogo – are reportedly smaller, stronger and more versatile. Both models can move across four axes, can lift 500 g (1.1 lb) and work between 5 and 32 cm (2 and 12.6 in) from the base.

Picking up and moving stuff is the uArm's specialty, and to that end it has a suction cup, gripper or a "Universal Holder" at its disposal. A modular attachment called a Seeed Grove socket adds other tools to its arsenal, including an electromagnet, RGB backlight, mini fan, and sensors for motion, color, temperature and humidity.With the help of an OpenMV Cam, the uArm Swift Pro can be taught to play...

They're powered by Arduino, and being open source, Ufactory is aiming to let the DIY crowd create their own programs and tasks for the arm through a visual programming language based on Blockly. These instructions can be relayed through USB and Bluetooth 4.0 connections, or the arm can be directly controlled through a keyboard-and-mouse setup or a smartphone app called uArm Play. There's a manual learning mode too, allowing you to guide the robot arm through a certain motion by physically moving it.

The base model uArm Swift is designed for beginners, packing this decent feature set into a frame that weighs 1.2 kg (2.6 lb) and measures 15 x 13.2 x 28.1 cm (5.9 x 5.2 x 11.1 in). The Swift Pro, on the other hand, is a little bulkier but far more precise, repeatable down to 0.2 mm, lending itself to more delicate tasks like drawing, 3D printing and laser engraving. With an OpenMV Cam, it can recognize, follow and respond to faces, colors and markers, allowing it to try its hand at chess or keep a fan aimed at your face.The uArm Swift robotic arm can be taught a movement by manually guiding the robot through...

Usually, playing around with all this tech comes with a hefty price tag. The Dobot M1, for example, which has an almost identical spec list, slugs your wallet for US$1,600, and more advanced options from bots like Rethink Robotics' Sawyer approach the $30,000 mark.

Spending thousands on a device that messily serves your breakfast or dynamically holds a lamp over your desk is excessive, but Ufactory is looking to make such things much more affordable. The company is currently seeking funding on Indiegogo, and is asking just $209 for basic model early bird pledge, representing a 51 percent saving on the expected retail price of $426. The Swift Pro, meanwhile, is currently up for a pledge of $339, and is expected to retail for $626. If all goes to plan, the uArm bots should be knocking on your door by May.

The uArm Swift can be seen in action in the campaign video.

AI will not result in catastrophic job losses