Composites will be Part of the World’s First Rotating Skyscraper 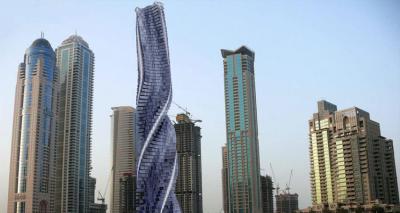 Over the past few years, Dubai has produced some incredible composites innovation, including the world’s first 3-D printed office building, materials for Apple’s new campus roof, passenger-carrying drones and components for the Boeing 777X, among others. By 2020, the region hopes to add another industry-changing innovation: the world’s first rotating skyscraper.

Leading the project is Italian firm Dynamic Architecture, led by architect David Fisher. The skyscraper, aptly named the “Dynamic Tower,” was inspired by Fisher taking in the view from the Olympic Tower in New York City in December 2004. He noticed from a certain spot, he could see the East River and the Hudson River, covering both sides of Manhattan.

“That is when I thought to myself: “Why don’t we rotate the entire floor? That way, everybody can see both the East River and the Hudson River, as well as Saint Patrick’s Cathedral!” Fisher said. He added that his architecture philosophy includes making buildings that “adjust to life.”

The skyscraper will have prefabricated floor units made with a combination of carbon fiber, steel and aluminum. As of now, the idea is for the entire tower to be powered from wind turbines and solar panels. Enough surplus electricity should be produced to power five other similar sized buildings in the vicinity. The turbines would be located between each of the rotating floors. Fisher said that they could generate up to 1,200,000 kilowatt-hours of energy. The solar panels are expected to cover the roof and the top of each floor.

Neri Oxman—Vision for the Future of Engineering