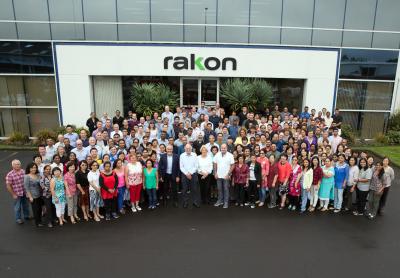 It was the era of black and white television, The Beatles, and the space race between the US and Russia to the moon. It was the 1960s and on the other side of the world, in his garage in little New Zealand, a man was making crystals to generate radio frequency. That man was Warren Robinson, founder of Rakon. Back then, Warren saw a large gap in the market for crystals and so he decided to make his own. The company became incorporated on 4 April 1967.

Fast track fifty years where connected technology is in use more than ever, and diverse applications are evolving rapidly. The company continues to design and make frequency control devices based around quartz. However, today, there is a plethora of communication and location systems which all require accurate clocking signals to generate precise electrical, radio or optical signals in networks and systems everywhere – and at the heart of many, is a Rakon product. This week the company is celebrating across its multiple sites worldwide.

“It is an incredible achievement to not only endure within a highly dynamic technology driven industry such as ours, but to continuously innovate and push technology boundaries, and we are immensely proud of this milestone.”

So has being a kiwi-led company played a part in Rakon succeeding?

“Certainly the can-do attitude and transparency we have had with our customers has forged very strong relationships with them and that is something inherent within the New Zealand culture. Also our relative isolation to the rest of the world provided the opportunity, particularly in the early GPS days, to develop in-house our own proprietary test equipment completely unique to what else was available, which gave us an advantage.

“However, largely we have achieved this milestone through the sheer drive and determination of our highly talented team of engineers and professionals worldwide. We have built a truly global manufacturing, R&D and customer/application support platform. Supporting that is a great team who are united with the same passion and curiosity to continually go beyond conventional performance limits.”

Diversification has also been strongly part of the company’s strategy and Robinson says continuing to diversify, evolve and shape the business to customer requirements will be essential to succeed in the years ahead.

In 2015 the company diversified through its investment with Thinxtra – an Internet of Things (IoT) business. In February this year, Taiwanese company Siward Crystal Technology Company Limited took a 16.6 percent share in the company, giving both companies a broader range of products and alternative channels, into new and existing markets.

“Listening to our key eco-system partners, staying abreast of developments and evolving the business accordingly to meet their requirements − and those of the industry − is mandatory” Robinson said.

Rakon has a proud history of delivering industry ‘firsts’, has won a number of industry and supplier awards and its products can be found in many international programmes.