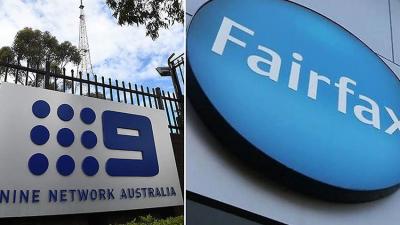 With the Channel Nine takeover of Fairfax you must have some recommendations on how the new organisation can preserve its newspaper titles. Should they re-jig their editorial strategy?If they want the titles as standalone profit centres they will have to start at the technical end. The new proprietors will have to start squeezing the performance out of the existing investment in printing resources that should have been delivered long ago.

In what way?Curiously, it is much easier to impose the design you want on a printing press than on an internet frame in which you are forced to follow a matrix, a grid. The use of print colour should be greatly extended. Above all the print titles should start using infographics instead of just text to explain what is going on.

So you advocate this emphasis on the pictorial…….Whenever a municipal councillor is mentioned, use their photograph. The same with the majority of Members of Parliament. Most of their electors do not know who most of these people are, what they look like….

Where do you slot management into this visual enhancement strategy?Foolishly, Fairfax management ceded authority to journalists. However fashionable this may be in theory, it does not work if you are in the business of preserving daily print titles. Journalists are not marketeers which is why they have self-selected themselves to become journalists.

So assuming that management is back managing……..They start issuing instructions that their internet sites must now reinforce their print titles, and ideally, specify tactics to this effect.

Sounds more easily said than done…….A piece of recent history will reinforce this point. The late Frank Haden wrote in a Fairfax Sunday a feature in which he articulated what people who actually buy newspapers are thinking. This as opposed to what the bien pensants describe what such people are thinking.

The Haden feature was carried in full on the internet site.

On one particular Sunday it was observed that the retail copies of the Sunday paper, the ones sold at corner grocery shops and the like, had completely sold out. A mystery. But one solved only when it was realised that someone had forgotten to run the Haden feature on the internet site. So people had gone out and bought the newspaper.

In other words Frank Haden was a must-read.

Why is it then that the dailies do not include these must-read features, always assuming that they have access to them in the first place?The reason is not understood because it so unbelievable. The dailies are targeted on people who do not buy newspapers. The newspaper-buying public is utterly definable . It is composed of baby-boomers and their seniors. This sector is pointedly ignored. There is instead this blind determination to discover the Shangri-La of the young newspaper buyer.

Even so, you might concede that this youth market existed prior to the internet….It never existed. How do I know? Because I was once involved in trying to build subscriptions in universities. You would have one copy per common room, and one or two floating around the canteens where the students could look at classified ads for flats and jobs….

You are going to say that these classifieds are now carried on the internet anyway…Before doing what I routinely accuse the dailies of doing which is presenting readers with shattering insights into the blindingly obvious, there is one factor in this whole context that is never mentioned. It is that the dailies coped with the arrival of television. But were blindsided by the internet although they had much more time to adjust to it simply because the build-up to the internet was over at least 10 years while the advent of television was virtually overnight…

Let’s try to be specific….Newspapers adjusted to television by personalising their contents. They started using by-lines and with first and last names. Most of all they covered the television people themselves in personality terms and for a while their circulations even increased as readers craved information about celebrities which at the time were in short rather than in the over-supply of today. Then soon after the arrival of television there was a huge breakthrough in print technology known as web-offset. This allowed and at no extra cost the unlimited use of illustrations and colour in general. This was widely applied at the time. So the baby-boomers, todays newspaper-buying bubble, grew up with this.

Your point being…..If the new Fairfax proprietors intend to keep the newspaper titles afloat they must go in at the technical entrance, the one that will lead to the concise and must-read presentation that will align the dailies to the internet. After all, people did not stop buying newspapers when television arrived.

It is just possible that the new proprietors have access to some trust fund, legacy, or other such endowment that we have not heard of. In the absence of such an advantage, they must implement this technology-led clarity of easily absorbed, factual, and digested information about what is going on and who or what is causing it to happen……