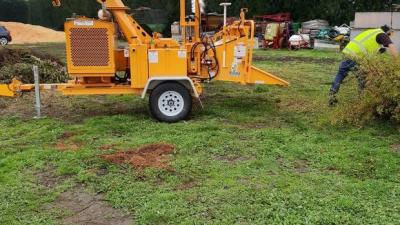 Fruit trees being chipped before burning at Pattullos Nurseries.

Too late for many New Zealand trees - A Hawke's Bay fruit grower says he has suffered financially and emotionally after he was made to burn thousands of fruit trees while waiting for a High Court judgement.

Kerry Sixtus from Pattullos Nurseries in Napier was one of five industry players hoping to put a stop to the Ministry for Primary Industries' efforts to destroy enormous amounts of thousands of imported apple and nectarine plants across Hawke's Bay after it issued a contain and/or destroy order for tens of thousands of plants.

A total of five growers from across the country, including four parties from Hawke's Bay, joined together to challenge the directive for nurseries and orchardists to contain and/or destroy tens of thousands of apple and stonefruit plants.

Although a High Court Judge yesterday found that the MPI directions were unlawful and directed MPI to reconsider its approach, Sixtus said that came too late for most: "Orchardists, probably just about most of them, have destroyed the trees that they were required to destroy and I've already destroyed some of my nursery crops as well."

The judgment encouraged MPI to work with industry to develop and agree a more appropriate set of directions that address their key biosecurity concerns.

The order affected 32 orchardists, nurseries, importers and intellectual property companies in Hawke's Bay, Waikato, Nelson and Central Otago across a range of fruit-based industries including apples and nectarines in Hawke's Bay.

More in this category: « Apple and stonefruit group willing to engage in meaningful discussions with MPI following High Court judgment Public visits planned for one of New Zealand's largest tropical fruit farms »
back to top
Sep 04, 2018